E.coli: Is my salad safe? 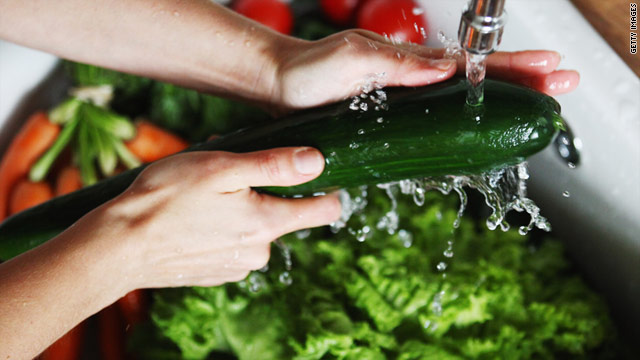 (CNN) -- From milk powder tainted with industrial chemicals in China to eggs contaminated with salmonella in the UK, food safety scares are nothing new, but the latest -- a deadly outbreak of E.coli in Germany is different.

While previous scandals have left consumers wary of burgers, ready-made sauces and juicy t-bone steaks, this case has struck at those who thought they were doing all they could to eat healthily: Salad vegetables are emerging as the prime suspect.

Health experts are working against the clock to find the exact source of the killer strain of E.coli which has left 16 dead and hundreds more sick, some of whom are critically ill with kidney and neurological complications.

The outbreak, focused on the northern German city of Hamburg, has spread to 10 countries worldwide, and left health authorities at its epicenter warning people not to eat raw vegetables.

"The source is still a mystery," Dr Jörg Debatin, director of the Hamburg Medical Center, told CNN. "At this point, we still have to assume it has something to do with vegetables.

"To sum it up, either peel it, cook it or leave it. That's a good way to live by, and fortunately there are lots of other things we can eat."

Dr Nicola Holden, from Scotland's James Hutton Institute, said that while food poisoning was usually linked to meat and eggs, cases relating to vegetables appeared to be on the increase.

Molecular microbiologist Dr Alan McNally, from Nottingham Trent University, said large-scale E.coli outbreaks in the US and Japan in recent years had both been linked to salad vegetables.

McNally told CNN such cases were usually linked to contamination from animal waste, either in groundwater, water used in irrigation, or in slurry spread on fields as fertilizer.

Holden said that as well as landing directly on the plants, the bacteria were also absorbed into their edible parts -- the leaves and fruit -- through their root systems, meaning that washing alone was not always enough to get rid of contaminants.

"The threat to human health occurs because these bacteria are not simply sitting on the surface of the plant and are particularly difficult to remove post-harvest," she said.

Health authorities say the case is a reminder of the importance of basic food hygiene practices, such as keeping surfaces and utensils clean.

"Simple precautions like hand-washing and not preparing food for other people when you're sick should prevent the spread from one person to another," Robert Tauxe, of the U.S. Center for Disease Control told CNN.

But experts insist there is no need for widespread worry.

"This outbreak seems to be confined to northern Germany, even the cases elsewhere are linked to there, and so there's absolutely no cause for concern," McNally told CNN.

"It's always a good idea to wash fruit and vegetables, but people don't need to get paranoid about eating salad."