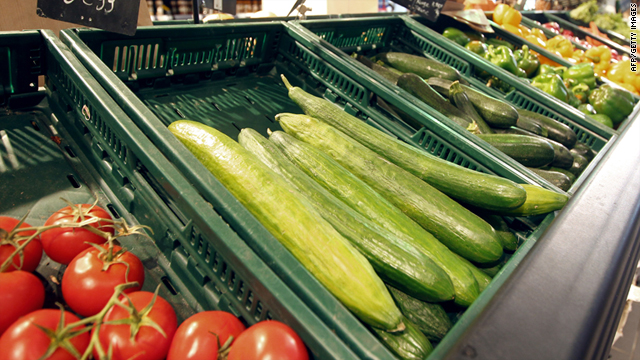 Tomatoes and cucumbers are displayed on May 30, 2011 in a stall in a supermarket in Paris.
STORY HIGHLIGHTS

(CNN) -- Russia has announced a ban on fresh vegetable imports from the European Union in the wake of a deadly E. coli outbreak that has swept across parts of Europe, state media reported Thursday.

"The ban will be in effect until we become convinced that this situation is resolved -- that is, when the source of the infection is located and it is established how it is being transmitted, but most importantly, when the outbreak is contained and people stop getting infected and dying," Gennady Onishchenko, head of the Russian Federal Agency for Health and Consumer Rights, told the state-run ITAR-TASS news agency.

"The commission will be writing today to the Russian authorities and we will be liaising and working with them in the coming days to try to find a solution," Vincent said.

The commission is the EU's executive body.

Customs officials have been instructed to prevent the produce from entering the country, according to Onishchenko. Supermarkets and food chains in Russia were told to withdraw European vegetables from their produce bins.

The ban could potentially affect some larger cities in the European part of the country, where about 90% of vegetables are imported, said Sergey Shugayev, chairman of the Rural Russia Association.

China and Turkey are the two largest exporters of fresh vegetables into Russia, according to the Russian Greenhouses Association.

The outbreak is responsible for 15 deaths in Germany and one in Sweden, according to the World Health Organization. The outbreak has sickened more than 1,000 people in at least 10 countries.

The European Food Safety Alert Network said EHEC, or enterohemorrhagic Escherichia coli, a strain of E. coli that causes hemorrhaging in the intestines, was found in organic cucumbers originating from Spain, packaged in Germany and distributed to countries including Austria, the Czech Republic, Denmark, Germany, Hungary, Luxembourg and Spain.

The ban on fresh vegetables from the European Union comes three days after Russia blocked the import of fresh tomatoes, cucumbers and salad greens from Germany and Spain. On Wednesday, the United Arab Emirates imposed a temporary ban on cucumbers from Spain, Germany, Denmark and the Netherlands.