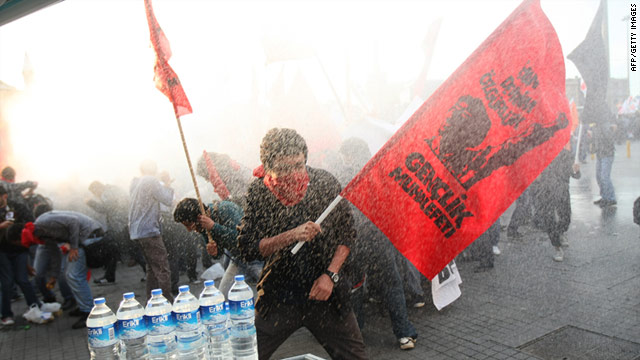 Istanbul, Turkey (CNN) -- At least one demonstrator died and a bodyguard protecting Turkey's prime minister was hospitalized after clashes erupted around a campaign rally Tuesday, less than two weeks before Turks go to the polls to vote in parliamentary elections.

The violence erupted in the Black Sea town of Hopa, where Prime Minister Recep Tayyip Erdogan was scheduled to address a rally.

An emergency room doctor confirmed to CNN that a demonstrator named Metin Lokumcu died of a heart attack after being brought to the emergency room of Hopa State Hospital.

But in a statement released on the website of the opposition Freedom and Solidarity Party (ODP), the party's deputy chairman Onder Isleyen accused Erdogan's ruling Justice and Development Party (AKP) of killing the protester.

"As a result of the AKP's murderous attack, our brother and friend Metin Lokumcu died," Isleyen wrote. "The AKP is attacking the public everywhere using tear gas and batons."

Two officials with Erdogan's entourage, speaking on condition of anonymity, confirmed that a demonstrator died in Hopa on Wednesday, though one of the officials told CNN the man died as the result of a heart attack.

Later in the day, a small group of demonstrators hurled stones at Erdogan's campaign bus as it was leaving the scene.

"One of the stones hit a bodyguard on the head and he fell off the bus, and when he fell he also hit his head on the ground," said one of the officials with Erdogan's campaign, again speaking on condition of anonymity.

Turkish television news filmed dramatic footage of the bodyguard tumbling from the bus, apparently unconscious as it sped down the street. The bodyguard was later hospitalized with head-wounds.

At a subsequent campaign rally in the Black Sea port of Trabzon, Erdogan lashed out at the protesters, calling them "bandits."

"Bandits with stones in their hands came to Hopa and unfortunately, of course, they attacked our vehicles with stones," Erdogan said.

Hours later, several hundred flag-waving demonstrators from leftist and secularist political parties hurled bottles and debris at riot police in Istanbul and chanted "murderers" as they ripped down a giant campaign poster of Erdogan.

Polls predict Erdogan's party will win another term in office in parliamentary elections scheduled for June 12. The party has been in power since it swept to an initial electoral victory 2002.