Mladic jailed at The Hague after extradition from Serbia 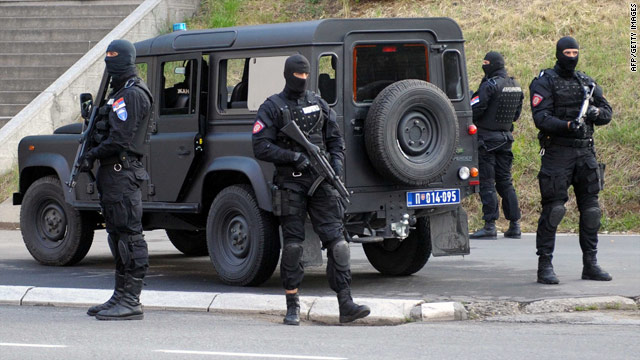 The Hague, Netherlands (CNN) -- Bosnian Serb genocide suspect Ratko Mladic was in the custody of a U.N. war crimes tribunal in The Hague late Tuesday after losing his fight against extradition from Serbia, the tribunal announced.

Mladic was being processed and undergoing a medical examination at the detention center that holds suspects for the International Criminal Tribunal for the former Yugoslavia, tribunal spokeswoman Nerma Jelacic said. He will be held in isolation for 48 hours before facing a judge, Jelacic said.

"This was a very, very long day for Ratko Mladic, I believe," said Miranda Sidran-Kamisalic, the Bosnian ambassador to the Netherlands. The 69-year-old ex-general was "very talkative" upon his arrival, she said.

Mladic was the commander of Bosnian Serb forces during the civil war in Bosnia-Herzegovina, the bloodiest of the conflicts that accompanied Yugoslavia's breakup in the 1990s. He faces charges of genocide, crimes against humanity and violations of the laws of war. He spent more than 15 years in hiding before his arrest Thursday in Serbia.

Mladic jailed in The Hague

Rally against arrest of Ratko Mladic

Mladic: A ruin of a man?
RELATED TOPICS

He is accused of leading a campaign of "ethnic cleansing" against Bosnia's Muslim and Croat populations that included the shelling of Sarajevo and the torture, abuse and rape of civilians. More than 200,000 Muslims and Croats died in the 1992-95 conflict, including nearly 8,000 Muslim men and boys slaughtered at Srebrenica in 1995 -- Europe's worst massacre since World War II.

Sidran-Kamisalic said she met with Mladic for about half an hour to discuss any needed consular services. She told CNN the meeting was professional but "incredibly difficult" personally.

"In my city, there were so many thousands of people who were killed," said Sidran-Kamisalic, a former Sarajevo resident. "Not only adults, but also more than 1,600 children were also killed in my city." But, she added, "I did feel that this was the first day that justice really, really almost became tangible."

Serbian Justice Minister Snezana Malovic said Mladic's extradition sends a clear message that all who are accused of war crimes in the former Yugoslavia will be brought to justice. "Bringing Ratko Mladic in front of justice is a satisfaction to all the victims and their families," he said.

"Serbia has fulfilled its moral obligation by its extradition of Mladic to The Hague."

And David Lidington, Britain's minister for Europe, called it "an important day for all those who suffered and lost loved ones during the terrible conflicts of the 1990s."

Mladic's lawyer, Milos Saljic, argued that Mladic would not be able to participate in a trial at The Hague because of his ill health. Saljic said he wants Mladic examined by specialists "who can investigate his specific needs," including a gastroenterologist, a cardiologist, a psychiatrist and a neurologist.

Mladic's son, Darko, told an ultranationalist rally Sunday that his father "needs medical treatment that he is not getting."

But Serbia's chief prosecutor, Vladimir Vukcevic, said Mladic was "lively and joking," and had asked for Russian classics to read while being held in Belgrade. And Sidran-Kamisalic said Mladic "seemed very fit, a very healthy man."

Saljic said he is applying for Mladic's unpaid pension from the years when he was in hiding, explaining he was acting on behalf of Mladic's family.

Mladic gave himself up without a fight Thursday, despite having two handguns, according to Rasim Ljajic, the government minister in charge of searching for fugitive suspected war criminals.

Officials located Mladic in a village called Lazarevo, north of the Serbian capital, after culling information from his former comrades, those who supported him financially and his close family members. It is not clear what source led investigators to the former military commander.

The arrest clears a major hurdle that once stood between Serbia and its long-awaited entrance into the European Union, but the move could also usher in political backlash from the country's electorate, some of whom consider Mladic a hero.

Speaking to a Serbian Radical Party demonstration outside Belgrade's parliament building Sunday, Darko Mladic described his father as "a freedom fighter." The elder Mladic "defended his own nation, defended his people, which was his job," his son said.

The younger Mladic called on protesters to keep the demonstration peaceful on Sunday, but protesters clashed with Serbian police anyway, leaving seven police officers and 12 civilians wounded and more than 100 under arrest.

The former general is considered the last of the fugitive war criminal suspects in the region. Previously captured were Bosnian Serb leader Radovan Karadzic and former Serbian President Slobodan Milosevic, who died in jail in 2006 during his trial at The Hague.

Bosnia remains largely divided nearly 16 years after the end of the war, with its largely autonomous Serb half taking steps that the U.N. high representative in Sarajevo warns will undermine the 1995 Dayton Accords, which ended the war.

"Sometimes we enter this process which is very fragile, but then something happens and draws us back," Sidran-Kamisalic said.

She said Mladic's capture could be an "incredibly important" step toward reconciliation. But she added that Bosnian Serbs need to hear the same kind of "clear message" from Belgrade that Croatian President Ivo Josipovic delivered to Bosnian Croats in 2010: "that Bosnia-Herzegovina is their home, and Sarajevo is their capital."

CNN's Nic Robertson and Ivan Watson contributed to this report.