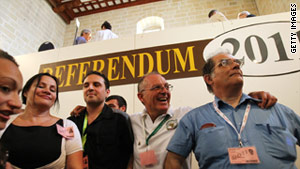 Green Party members announce the 'yes' vote in the poll to legalize divorce in Malta at a polling station in Valetta Sunday.
STORY HIGHLIGHTS

(CNN) -- Voters in the overwhelmingly Catholic country of Malta have elected to allow divorce, the prime minister said.

Initial results of a weekend referendum suggest the measure will pass with some 54% of votes in support of the introduction of divorce.

Though counting continues, analysts predict the vote will carry and Maltese Prime Minister Lawrence Gonzi -- who opposed the measure -- has conceded.

"Even though the result is not what I wished for, now it is our duty to see that the will of the majority is respected," Gonzi said.

The Mediterranean island nation of Malta is one of the only countries in the world that does not permit divorce. About 98% of Maltese residents are Catholic.

Gonzi said the parliament is now expected to enact legislation that will make divorce legal.