Obama heads to Ireland in search of his roots 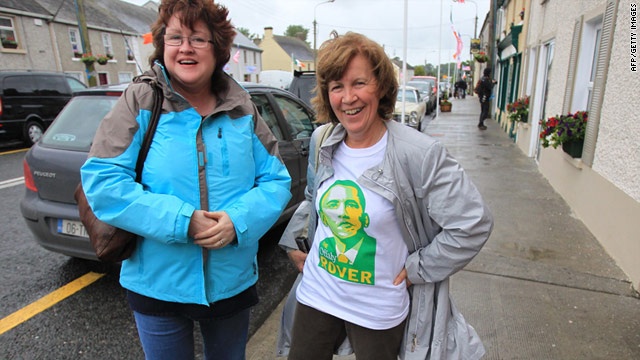 Moneygall, Ireland (CNN) -- "You discover a lot about yourself when you're running for president," Barack Obama said on the campaign trail in 2008. "It was brought to my attention last year that my great-great-great-grandfather on my mother's side hailed from a small village in County Offaly."

Two years into his presidency and Obama has decided to pay that small village a visit. If a village can get emotional, Moneygall -- with its 300 residents -- is in raptures. Children sporting "O'Bama" T-shirts skip along the high street waving American flags. Beaming villagers scramble up ladders to smarten up the fronts of their homes.

"Dulux provided all the paint for all the houses in the place, they sent down a lady to coordinate all the colors and she's done a pretty good job on it you know," says resident Timmy O'Conor, brandishing a paint brush. "If it passes the man himself now, that's the thing."

There's speculation the man himself may swing by the Ollie Hayes Inn for a pint of Guinness. Ollie Hayes says he's had the CIA come through some months back but there's still no certainty that it'll actually happen. If Barack Obama does stop by though, he'll find a large faux-bronze bust of himself gracing the bar and Hayes says he'll be ready and waiting with the Guinness. "Who knows," says Henry Healy who I meet in the pub, "we may all have to join him and raise a glass to his re-election campaign in 2012."

Healy is a distant relative of President Obama and was invited by the Irish-American Democrats and the American-Ireland Fund to go to Washington for his inauguration. "Our relationship goes back to 1761 when there was a marriage between Sarah Healy and Joseph Kearney. Joseph Kearney is the great-great-grandfather of Falmouth Kearney who emigrated from this village in 1850."

We all had great excitement in the beginning when the word came through he was related to us.
--Sadie Williams, Obama's oldest living relative in Ireland
RELATED TOPICS

Relatives though are a dime a dozen in this part of the world. Healy's aunt, 75-year-old Sadie Williams, says she thinks she's Barack Obama's oldest living relative in Ireland. "It's very exciting for us all," she tells CNN. "We all had great excitement in the beginning when the word came through he was related to us."

Williams' grandson goes to school at Kilkenny College, about an hour from Moneygall. The college boasts alumni like author Jonathan Swift and philosopher George Berkeley, the namesake of what is now the University of California - Berkeley. Now it boasts 13 students who all claim some family connection with President Obama. "I was only aware of these two boys being my cousins," says the oldest of the 'Obama cousin' clan, 17-year-old Kate Condell. "We didn't realize we were interlinked before."

There's a huge star spangled banner draped across the classroom table and the deputy headmaster has laid out a number of Barack Obama biographies. But the children admit they haven't read them. Kate Condell is the only one who's even visited the United States. "Just Florida on a family holiday, but an invitation to the White House would be much appreciated!"

Perhaps not at Kilkenny College, but elsewhere in Ireland there is a palpable anxiety in the air. The dire state of the economy, the burden of day-to-day financial struggle, the uncertainty over whether Ireland can ever escape its debts -- these are issues which weigh heavy on a people known for their good cheer. "We all just want a rest from it, to talk about something else," one pub-owner tells CNN.

As many of his predecessors -- including John F. Kennedy, Ronald Reagan, Bill Clinton and the Bushes -- have done before him, Obama is in search of his Irish roots, not least because it is sure to go down well with the 40-million Irish emigres with Irish roots living in the U.S.

This is after all the start of his 2012 re-election campaign. But to the Irish on the Emerald Isle it is a home-coming; a gesture of solidarity and kinsmanship in troubled times. And a chance for the villagers of Moneygall to throw a party that will likely last long after the president's gone.