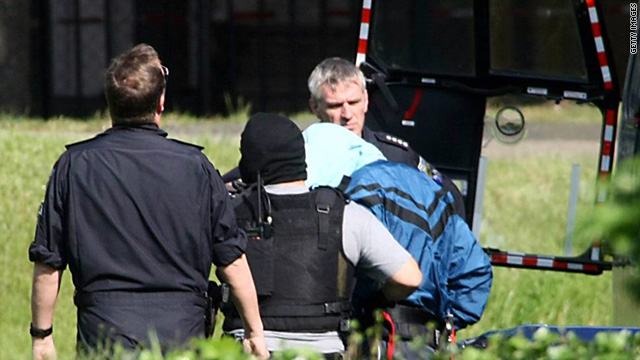 The mastermind had been making plans as early as the beginning of last year and "recruited several dedicated personnel" who were trained along the Afghan-Pakistani border and "plotted to commit at least two attacks in Germany," said federal prosecutor Rainer Griesbaum after the three made an initial court appearance Saturday in Karlsruhe.

According to a federal court statement, the main suspect is a Moroccan national identified as 29-year-old national Abdeladim El-K., who is specifically accused of getting weapons and explosives training at an al Qaeda training camp last year. Authorities believe that the al Qaeda member ordered him in spring of 2010 to carry out a bombing in Germany.

Griesbaum, citing intelligence gathered by German authorities, said the attacks would have been carried out with "weapons and explosives and be directed against representative buildings and large masses of people."

The details surfaced a day after the three men were arrested in Dusseldorf and Bochum.

The raid yesterday was necessary because we had enough intelligence about two of the suspects to put a stop to it, especially after Marrakech.
--German prosecutor Rainer Griesbaum
RELATED TOPICS

"The raid yesterday was necessary because we had enough intelligence about two of the suspects to put a stop to it, especially after Marrakech," Griesbaum said, referring to Thursday's bombing of a popular Moroccan cafe that killed at least 15 people.

Griesbaum said the men did not have a concrete target in mind yet. "They were still in the experimental phase in creating the bomb, as we learned after searching the premises."

While German officials hoped that the plotted attacks had been thwarted with the arrests, the head of the federal Office of Criminal Investigations couldn't give an "official all-clear."

"There are possibly more people in this network in Germany," Joerg Ziercke said. "We at least know of one person we haven't identified yet."

Ziercke said Abdeladim El-K. has been living illegally in Germany since November 2010 to "undertake logistical preparatory work for the attacks in Germany. He also built up a network under his leadership. We also found links to Austria, to Morocco, Iran and Kosovo as well as other European countries."

Several German news outlets on Friday reported that chemicals useful in the production of explosives were found on the suspects.

The German magazine Der Spiegel reported that Abdeladim K. and the others were arrested after German authorities intercepted communications referring to a "test" in a several-months-long investigation that also saw the involvement of the CIA.

The arrests come at a time of heightened concern in Germany over the threat of al Qaeda terrorism.

Last November, Germany raised its alert level after intelligence suggested al Qaeda was plotting a "Mumbai-style" attack against the country as part of a broader conspiracy against European cities.

Islamic militants staged assaults against several targets in the Indian city of Mumbai in November 2008.

A German intelligence official told CNN Friday that while concerns had eased over the plot, security forces remained vigilant.

In September 2007, German authorities broke up a plot to attack American servicemen in the country by a German terrorist cell trained in bomb-making by the Islamic Jihad Union -- an al Qaeda-affiliated Uzbek group based in the tribal areas of Pakistan.

The four plotters, who were convicted of the plot in a trial held in Dusseldorf last year, had amassed 100 times more peroxide-based explosives than had the bombers of the London subway in 2005.

German intelligence officials have grown increasingly concerned about the numbers of German Islamist extremists traveling for jihad in the Afghanistan-Pakistan border region.

While most are believed to travel there to fight in Afghanistan, their presence in the tribal areas of Pakistan has provided al Qaeda and affiliated groups with opportunities to recruit operatives for plots against the West.

German intelligence officials said several militants from the German port city of Hamburg who travelled to train in Pakistan's tribal areas were involved in an al Qaeda attack plans against Europe last fall.

According to German authorities, more than 200 Germans have traveled to training camps in Pakistan in recent years. German intelligence officials told CNN that more than 40 are still believed to be fighting and training in the Afghanistan-Pakistan border region.

The arrests come just two weeks after one of the Germans currently thought to be in the tribal areas purportedly released a message calling for attacks in Germany. The message came from Mounir Chouka, an extremist who had lived in Bonn.

According to a translation of the message by the SITE Intelligence Group, Chouka urged attacks in Germany following what he called a "pyramid system," in which priority should be given to targeting the head of state, then federal officials and soldiers, and finally average citizens.

Intelligence officials said Chouka is one of two brothers who have emerged as German spokesmen for the al Qaeda-affiliated Islamic Movement of Uzbekistan (IMU). The brothers are suspected of facilitating the recruitment of dozens of Germans into the IMU, including Ahmed Sidiqi's Hamburg group.

Homegrown radicalization has emerged as a significant problem in Germany in recent years, fuelled according to German intelligence officials by the rise of social media and the emergence of German-language jihadist sites that have called on German Muslims to fight American troops in Afghanistan.