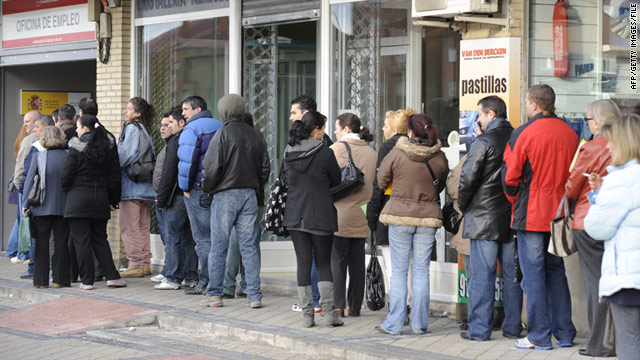 About 4.6 million Spaniards are unemployed, while 1.3 million homes have no one in work.
STORY HIGHLIGHTS
RELATED TOPICS

Madrid (CNN) -- A 25-year-old Spanish man has been ordered by a judge to leave home and look for a job after he took his parents to court for stopping his allowance money.

The man from Andalusia in southern Spain had taken the court action demanding a monthly allowance of $588 after his parents stopped giving him his spending money unless he tried to find a job.

However, the judge told the man, who has not been named in court documents, that he must leave his parents' house within 30 days.

The judge said the man was studying law, albeit at a slow rate, and would probably not complete the degree for several years, but he thought he was still capable of finding some kind of work.

The family court in Malaga says the situation at the home had seriously deteriorated with the parents claiming their son had physically and verbally assaulted them.

The man's mother works in a restaurant while his father works for a garbage collection firm. The judge also ordered that the parents should pay a $292 monthly food stipend for 2 years. The parents have also taken over the monthly repayments on their son's car.

In Spain it is not unusual for offspring to remain living with their parents until well into their 30s, a trend strengthened by a tough labor market where the youth unemployment rate is 40.5%, the highest in the European Union.

There are 4.6 million Spaniards unemployed, and 1.3 million Spanish homes with no one in work, according to government figures for the fourth quarter of 2010.