4 suspected Islamic militants set to go on trial in Spain 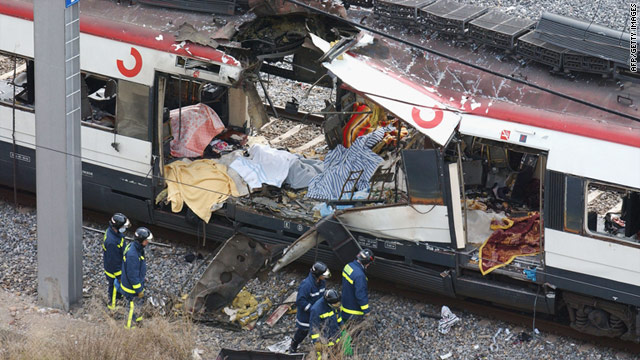 Madrid, Spain (CNN) -- Four suspected Islamic militants are due to go on trial Thursday afternoon in Madrid for allegedly aiding fugitives from the Madrid train bombings of 2004, a National Court spokesman told CNN.

Prosecutor Miguel Angel Carballo, at Spain's National Court, seeks sentences of eight to 13 years in prison against the four male suspects, who include a Moroccan, an Algerian, a Tunisian, and a fourth man whose nationality was not immediately disclosed, said the spokesman, who by custom is not identified.

The prosecutor alleges the suspects provided clandestine lodging in Madrid and in a Barcelona suburb, as well as other aid to various fugitives who "were directly implicated" in the Madrid train bombings that killed 191 people and wounded more than 1,800, the spokesman said.

Spanish courts already have convicted 14 Islamic militants for their roles in the train bombings, along with four Spaniards, the latter for trafficking in explosives used in the attacks.

Additionally, seven other prime Islamic suspects in the attacks blew themselves up three weeks after the train bombings as police closed in on their hideout in a Madrid suburb. That explosion also killed a police officer and wounded various others.

The seventh anniversary of the train bombings was two weeks ago on March 11.

Last February, Spain's Supreme Court overturned a lower court's conviction of five other men for Islamic terrorist activities that included aiding fugitives from the Madrid train bombings and planning other attacks, according to the court order made public March 2.

The National Court in January 2010 had convicted the five other men --- three Moroccans, an Algerian and a Turk --- for collaborating or belonging to an Islamic terrorist group and sentenced them to prison terms from five to nine years.

But the Supreme Court disagreed, ruling that telephone wiretaps used to gain crucial evidence against those five suspects lacked the proper protections under Spain's constitution, and there was "insufficient evidence, beyond all reasonable doubt," to prove the crimes that prosecutors alleged.

Those five men were in a group based in a Barcelona suburb, Santa Coloma de Gramenet, before police made arrests in June 2005. Some of the suspects to go on trial Thursday also allegedly operated their network to aid fugitives from the same Barcelona suburb.

The trial is expected to last several days.