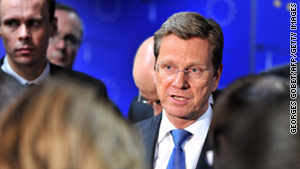 German Foreign Minister Guido Westerwelle has refused to comment on whether NATO should take a leading role in enforcing U.N. resolution 1973.
STORY HIGHLIGHTS

Gioia Del Colle, Italy (CNN) -- Even as British RAF Typhoons took to the skies from this southern Italian air base, there was mounting tension between allies about who should command the mission to protect civilians and enforce a no-fly zone in Libya.

After heated exchanges between NATO ambassadors in Brussels, the alliance announced Tuesday an operation to enforce the arms embargo against Libya. But it went no further on deciding if or when NATO would take command of the mission already under way, in which several allies are participating.

In a statement, NATO only said that it had plans on the table to enforce the no-fly zone "if needed."

The backdrop was a simmering feud between France and Italy that turned more cynical by the hour. Italy is demanding that NATO take a lead role in the military and political decision-making during the remainder of the Libyan mission.

But resistance within the alliance mounted even as the United States expressed its desire to take a back seat in the operation and hand over any command role to European allies. France seemed most reluctant to submit to NATO command, but Germany and Turkey also voiced objections.

These countries also argue that Arab League nations would be shut out of any decision-making if NATO took control.

Who should lead coalition efforts?

Cost of U.S. involvement in Libya

German Foreign Minister Guido Westerwelle said he continues to believe it was right not to participate in the United Nations-sanctioned mission. He noted that Germany is not alone in its skeptical view of military action, pointing to the fact that other European nations are not taking part either.

Westerwelle also refused to comment on whether NATO should take a leading role in enforcing U.N. resolution 1973.

"That is for the coalition of the willing to debate," Westerwelle said.

French Foreign Minister Alain Juppe told French media that NATO would play a role in the mission in coming days but that France, Britain and a council of other coalition partners would make political decisions. One NATO official described this to CNN as putting the alliance's assets at the disposal of the coalition, but NATO would have no formal political role.

The squabbling continued as Italian Foreign Minister Franco Frattini again threatened to take back complete control of Italian airbases if NATO did not take the reins of the mission.

"Who, if not NATO, can take on this task?" said Frattini in comments to Italian media.

On a busy day at the Gioia Del Colle Air Base in southern Italy, RAF Typhoons executed a number of sorties to enforce the no-fly zone in Libya.

"The Italian support is crucial," said Royal Air Force Commander, Group Captain Sammy Sampson, but added that his fighters could operate from other locations. "It's a decision for our headquarters and our political masters."

Discussions between NATO allies will continue this week as the alliance continues to disagree over the parameters and scope of the U.N. resolution that authorized all means necessary to protect civilians in Libya, as well as imposing a no-fly zone over the country.

As well as disagreeing over whether Libyan leader Moammar Gadhafi is a legitimate target, there is the question of whether Libya will split along tribal lines or whether a united Libya is even a possibility. There is no appetite among coalition allies to get involved in a tribal grudge match or civil war.

Turkey, also a NATO member, also voiced its opposition to a political role for the alliance and has forcefully suggested that the mission so far has already gone beyond the intention of the U.N. resolution to protect civilians. However, one NATO source told CNN that they did not see Turkey's objections so far as a major stumbling block to a further role for NATO.