Historic carriage to transport Prince William and his bride 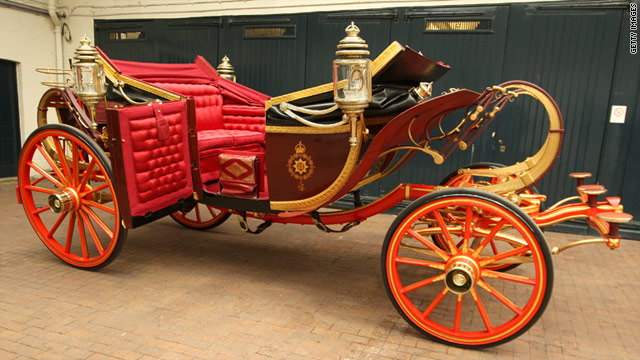 London (CNN) -- It's a scene straight out of Cinderella: a princess in her royal wedding dress, riding in a horse-drawn carriage through majestic streets.

That's just what Kate Middleton may look like on her wedding day next month. Buckingham Palace announced Tuesday that a century-old gold-trimmed royal carriage will carry the new princess and her prince, William, from Westminster Abbey through central London to the palace.

The same carriage -- called the 1902 State Landau -- has carried previous royal brides on their wedding days. William's mother, Lady Diana Spencer, rode in it in 1981 after her marriage to Prince Charles, and Sarah Ferguson traveled in it five years later after she wed Prince Andrew.

It was specifically built for King Edward VII in 1902 to be used at his coronation, and it remains the most-used carriage in the Royal Mews, usually used these days by Queen Elizabeth II when she meets foreign heads of state.

It is an open-top carriage, so if it rains, the new royal couple will instead travel in the enclosed Glass Coach, another historic carriage, the palace announced.

The Glass Coach was built in 1881 and purchased for use at King George V's coronation in 1911. Princess Diana and Sarah Ferguson used it on their way to their weddings, along with three other brides: Elizabeth Bowes-Lyon, who married the future King George VI in 1923; Princess Alexandra in 1963; and Princess Anne in 1973.

The wedding procession will take in some of central London's most famous sights. After leaving the abbey, it will pass the Houses of Parliament and Big Ben, the prime minister's residence at Downing Street, the Horse Guards Parade and the Mall: the long avenue that stretches from Trafalgar Square past St. James's Park, straight to Buckingham Palace.

As they make their way to the palace for their wedding reception, Middleton and William will be at the head of a five-carriage procession.

Riding in the two carriages behind them will be the best man, William's brother, Prince Harry; the maid of honor, Middleton's sister, Philippa; and the bridesmaids. The queen and her husband will travel in the next carriage, with Prince Charles and his wife, Camilla, and Middleton's parents riding together in the last.

Eighteen horses will pull the five carriages, with the white-looking Windsor Greys, which are usually reserved for the queen, pulling the newlyweds.

The carriages are maintained by Senior Carriage Restorer Martin Oates, whose family has been working in the mews for four generations.

Like everyone working in the palace, Martin has his own particular concern: "If the wheels fall off, then obviously I would lose my job, so that is a bit of a worry," he said.

Martin's key task on the big day will be "chocking," which means fixing blocks of wood under the carriage wheels, so they don't move as the passengers get in.

As beautiful as they are, state carriages aren't always an easy way for passengers to travel. As the carriages move along, they swing around in a circular motion, which can make passengers feel queasy.

Between now and the wedding, however, Middleton will have a chance to get used to the feeling -- and, crucially, to practice getting in and out.

"I think she will wish to practice getting in and out of the carriages, because obviously, on the day, she will be wearing a dress with a large train," Crown Equerry Toby Browne said. "And it's a quite difficult event to get into a carriage and get settled so it looks perfect, but I think she's very excited about it."

Middleton will take a more modern mode of transport to the abbey before the service, the palace announced.

In fact, she plans to travel in the same Rolls-Royce used by Prince Charles and Camilla, the Duchess of Cornwall, when they were attacked by protesters in London in December, Buckingham Palace said.

"Rolls Royce 1," which has glass in the back panels, is currently being repaired in readiness for for the April 29 wedding.

"It's actually designed with visibility in mind, so you actually probably get a better view in the Rolls-Royce that she's using than a closed carriage," Palace Transport Manager Alexander Garty said.

In December, students protesting increases in university costs hit the car with paint and cracked a window, as Charles and Camilla rode through a crowd en route to a show in central London.