Turkey to serve as protecting power for U.S. in Libya 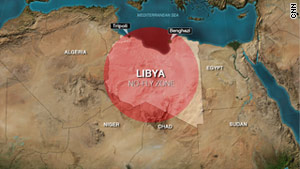 A coalition of international forces is enforcing a no-fly zone over Libya.
STORY HIGHLIGHTS

Washington (CNN) -- Turkey will serve as a "protecting power" for the United States in Libya, senior State Department officials told CNN on Sunday.

As a protecting power, Turkey will represent the United States in Libya, including acting as consular officers on behalf of U.S. citizens in Libya and looking after American diplomatic facilities in the country.

Turkey can also pass messages between the United States and Libya, as what little communication remains between the two countries is likely to come to a grinding halt now that the U.S. is bombing Libyan targets as part of enforcement of a no-fly zone.

Levent Sahin Kaya, Turkish ambassador to Libya, told CNN he will represent America in Libya along with the United Kingdom and Italy.

Although the United States has not formally suspended ties with Libya, the U.S. State Department shuttered its embassy earlier this month and withdrew all of its diplomats from the country. The State Department also ordered the Libyan embassy in Washington closed and ordered its diplomats to leave the country. It recognized Ali Aujali -- the former ambassador who resigned from the regime in protest of its violence against citizens and joined the opposition -- as the legitimate representative of the Libyan people.

Officials said Libya has not yet identified a protecting power of its interests in the United States.