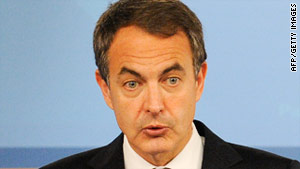 Madrid, Spain (CNN) -- Spanish Prime Minister Jose Luis Rodriguez Zapatero Wednesday ordered a review of his country's nuclear power plants in light of the crisis unfolding in Japan, where workers are battling to contain radioactive materials at a plant after an massive earthquake and tsunami.

Spain is the latest in a number of countries around the world who are giving their nuclear programs a second look as Japan tirelessly works to avoid a nuclear disaster.

"We should do this, but there are reasons to remain calm about the safety of our nuclear plants and about the reports the Nuclear Safety Council is preparing," Zapatero told reporters of his decision for a review.

He added, "What we are going to do is be even more sure and safer. And if there is a needed improvement at some nuclear plant due to a hypothetical risk, that's the work of the Nuclear Safety Council."

Separately, Zapatero said that Spain is not ordering an evacuation of its nationals in Japan because there's been no such request from the Japanese government. Instead, Spain will follow Japan's lead and will try to assist those Spaniards who wish to leave.

There are no Spaniards in the affected zone near the nuclear power plant or in other high-risk areas, the prime minister's office reported. There are about 1,900 Spaniards in Japan, more than half of them in the Tokyo area.

In Venezuela, President Hugo Chavez said that preliminary plans for a nuclear power plant in his country will be halted. He ordered his energy ministry to look for alternative sources of energy.

Tuesday, German Chancellor Angela Merkel announced a three-month moratorium on the extension of the operation periods for German nuclear plants.

That move will lead to at least one German nuclear plant shutting down very soon, Germany's environmental minister later said in a statement.