Police: UK arrest could be connected to Sweden bombings 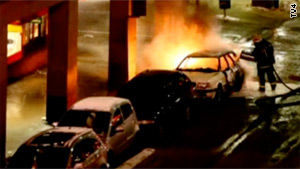 Two December explosions occurred within minutes of each other in Stockholm district full of Christmas shoppers.
STORY HIGHLIGHTS

London (CNN) -- An investigation shows there may be a connection between a man arrested in Scotland Tuesday and a December suicide bombing in Sweden, police said.

The Swedish Security Police said authorities were still investigating after arresting a man under the United Kingdom's Terrorism Act Tuesday.

Police in Glasgow said that a 30-year-old individual had been arrested as part of an operation connected to an incident in Sweden. They said intelligence indicated the individual was involved in aiding terrorist activities out of Scotland, but they did not provide further details.

Two December explosions occurred within minutes of each other in Stockholm in a district full of Christmas shoppers, Swedish authorities said. Swedish news agency TT and police said they received e-mailed threats 10 minutes before the explosions.

A bomber who apparently killed himself was probably on his way to a more crowded location, but his bomb went off prematurely, Swedish authorities said.

He sent a warning to the Swedish news agency from his phone shortly before the explosion, chief prosecutor Thomas Lindstrand said.

The warning came from a man called Taimour Abdulwahab, the news agency that got the e-mail told CNN.

Lindstrand said in December that authorities were almost certain that he was the bomber, but they had not yet carried out DNA testing or spoken to his family.

No one other than Abdulwahab was killed.

Authorities say Abdulwahab had lived in Iraq and sent e-mails indicating his distaste for the presence of Swedish troops in Afghanistan and the Scandinavian country's tolerance of Lars Vilks' newspaper cartoon of the Prophet Mohammed as a dog.

Days later, Swedish police released a report indicating that violence-promoting Islamist radicals do exist in their country and should not be underestimated as potential threats, according to a study from Swedish Security Police.