By Lianne Turner, CNN and Susannah Palk for CNN 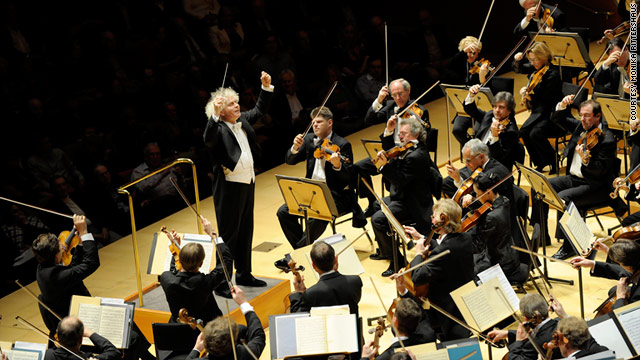 Simon Rattle, chief conductor at the Berlin Philharmonic since 2002, says "you cannot tame this orchestra ... it's like a panther."
STORY HIGHLIGHTS
RELATED TOPICS

(CNN) -- It is one of the most revered orchestras in the world. But members of the celebrated Berlin Philharmonic are almost as famous for their fiery individualism as for the powerful music they play.

With 128 players, who all have a vote in who is hired and fired -- including their conductor -- the orchestra can be a intimidating bunch. The man charged with steering these unique and independent-minded musicians is chief conductor Simon Rattle.

"The first thing you have to realize is you cannot tame this orchestra. It would be a real shame if you tamed them. This orchestra is a panther and they go and they run," Rattle told CNN.

"These are all John Malkoviches and Dustin Hoffmans, there are no supporting actors in the Berlin Philharmonic. It's an unusual group like that," he continued.

At the helm for almost 10 years, Rattle says leading such a dynamic orchestra is about working collectively to create the music.

"We are all in it together. (Herbert von Karajan, Berlin's conductor for 35 years) used to say it's more like a jockey and a horse. You are there but it's the horse that does everything."

He continued: "Everyone has their own ideas, the wonderful thing is it can also be like a contact sport, you throw out an idea and they throw one back."

But Rattle can give as good as he gets, as Berlin's first female horn player, Sarah Willis, can attest to.

"Simon's a wild animal as well, that's why he fits so well to the orchestra. It has to do with this voltage of energy which comes together," she said.

"I've seen new first time conductors be just blown away on stage thinking 'Gosh, what's happening here.' The orchestra's very physical when it plays ... like a mass of seething bodies."

The orchestra's fiery individualism is in part due to its history, as Rattle explained.

"They are actually the most completely independent orchestra in the world," he added.

This independence means each member gets a single vote in who makes up their numbers, and competition is fierce. With a trial period of two years not only do musician have to play well, they must get on with their peers.

The first thing you have to realize is you cannot tame this orchestra. This orchestra is a panther and they go and they run.
--Simon Rattle, chief conductor at the Berlin Philharmonic Orchestra

Willis explains: "First you have to pass the very stiff audition in front of the whole orchestra.

"It was one of the most terrifying experiences of my life. There were two of us in the last round and he and I both stood together on the stage and were played off against each other, a bit like Russian roulette."

She continued: "Then once you get the job you're on a two year probation time and they take that very, very seriously. It's not just how you play, its how you fit in, what you're like as a person and what you can bring to the orchestra."

This democratic structure means most of the musicians have second administrative jobs within the organization dealing with everything from ticketing to event organization.

Although a challenge to control, the gathering of such talented musicians can be an immense joy for conductors, as Willis explained: "There is no technical limitation somehow, and that's what the conductors really enjoy when they come here.

There are great musicians all over the world, but I've never come across an orchestra so full of people who really, they can do everything.
--Sarah Willis, horn player at Berlin Philharmonic
RELATED TOPICS

"They feel like they're driving a Rolls Royce, they push the players really hard to play quieter to play faster, to play louder and they can do it, they really can do it.

"There are great musicians all over the world, but I've never come across an orchestra so full of people who, really, they can do everything."

Not only revered for their technical ability and passionate performances, the orchestra is constantly striving to bring their music to a wider audience.

A program which sees them play in venues as varied as schools, empty factories and prisons, as well as offering free performances and lectures in lunch hours and evenings means many people can bypass the often prohibitive ticket prices.

But perhaps the most popular and groundbreaking initiative is the orchestra's Digital Concert Hall. The only project of its kind worldwide, audiences are able to listen to the Berlin Philharmonic play from anywhere in the world.

These initiatives are essential, says Rattle, to ensure the orchestra's broad appeal and its very survival.

"If an orchestra is not part of the city, if it is just in an ivory tower, it will die and will deserve to die," he said.