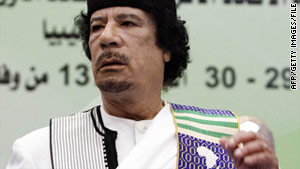 Britain has revoked the diplomatic immunity of Moammar Gadhafi and his family.
STORY HIGHLIGHTS

"The people of Libya have risen up against Colonel Gadhafi," Hague said. "We have here a country descending into civil war with atrocious scenes of killing of protesters and government actually making war on its own people, so of course it is time for Colonel Gadhafi to go.

"That is the best hope for Libya," he said, adding that he had revoked the diplomatic immunity in the United Kingdom of Gadhafi, his sons, his family and his household.

"So it's very clear where we stand on his status as a head of state," Hague said on the BBC's "The Andrew Marr Show."

Gadhafi's history of tension with the West
RELATED TOPICS

The British government said Sunday it was freezing the assets of Gadhafi, five of his children and those acting on their behalf.

British Chancellor George Osborne said the move makes sure the assets "cannot be used against the interests of the Libyan people," and is "a strong message for the Libyan regime that violence against its own people is not acceptable."