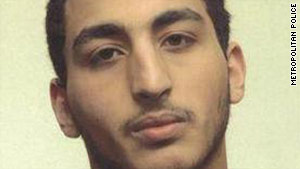 London, England (CNN) -- A student was jailed for five years in Britain Friday after being found guilty of posting extremist Islamic material, including footage of attacks on coalition troops in Afghanistan, on the Internet.

According to the Metropolitan Police Service's Counter Terrorism Command, Mohammed Gul, 23, from Hornchurch in east London, posted movies he had created -- as well existing extremist videos -- on video-sharing website YouTube over a period stretching from March 2008 to February 2009.

Using accounts named "marinetargetcorp," "marinetargetinc," "35marines," and "marinetargetboy," Gul uploaded video that included attacks on coalition forces in Afghanistan and Iraq, the making of and detonation of Improvised Explosive Devices (IEDs), terrorist training camps and footage of the 9/11 attacks in New York.

He then moved on to creating a compilation video of extremist material relating to the situation in Gaza following the conflict with Israel in December 2008.

Gul was "pouring petrol on the fire" and his actions could have spurred others to commit acts of terror, the jury at the Old Bailey in London heard, according to Britain's Press Association.

This is one of the first successful prosecutions relating to disseminating terrorist publications via the Internet.
--Deputy Assistant Commissioner Stuart Osborne
RELATED TOPICS

Gul told the court he did not support terrorism but acted through curiosity and his political beliefs, PA added.

He was found guilty of five counts of dissemination of terrorist publications.

One movie file created by Gul from available audio and video media, depicted images from Gaza and then of IED explosions of cars and tanks with a red circle superimposed to highlight the bodies falling out of the vehicles. It also included images from other conflicts around the world, including IED attacks in Iraq and Afghanistan, and a sniper attack on a coalition soldier.

"This is one of the first successful prosecutions relating to disseminating terrorist publications via the Internet and shows our commitment to tackling those who support and encourage terrorism whatever means they use."

The law student was arrested at his home on February 10, 2009. Counter-terrorism officers searched the premises and recovered two computers and a number of storage devices containing the extremist material.

Police also revealed that a large amount of other extremist material was found, including footage of executions and martyrdom videos by suicide bombers.