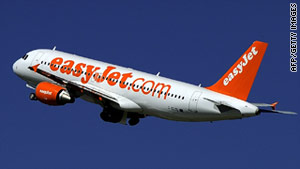 (CNN) -- A United Kingdom budget airline has apologized to its Jewish customers after loading ham and bacon baguettes on to the flight instead of the standard kosher food.

EasyJet said it made the mistake on a flight from Israel to London.

Some passengers were forced to go hungry during the 4 1/2-hour trip from Tel Aviv.

An airline spokeswoman said incorrect food canisters were loaded onto the aircraft, though pork was not served to passengers.

EasyJet's standard practice is to offer kosher and vegetarian sandwiches onboard Israeli flights, the spokeswoman said.

She said the airline also offers nonkosher products but its policy is not to load any pork products.

"We would like to apologize to the passengers, and can confirm we have done everything we can to ensure that this does not happen again," the airline said.