Australia wants Assange treated fairly if he is extradited to Sweden 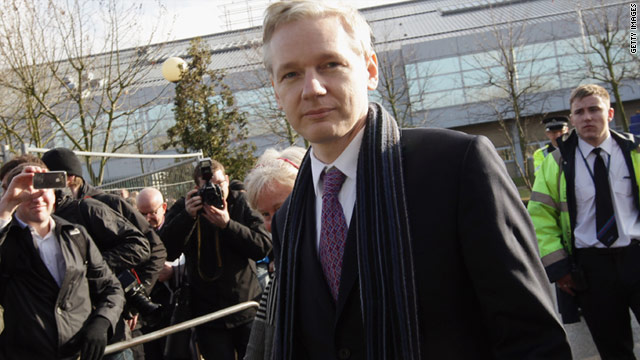 A judge in Britain is expected to rule next week on whether Assange, an Australian, should be extradited to Sweden.
STORY HIGHLIGHTS

(CNN) -- The Australian government expects WikiLeaks founder Julian Assange to be treated fairly if he is extradited to Sweden, the Australian ambassador to Sweden said in a letter to the country's justice minister.

A judge in Britain is expected to rule next week on whether Assange, an Australian, should be extradited to Sweden.

Assange denies the accusations, and his attorneys are fighting his extradition on procedural and human-rights grounds.

"I have no doubt of course that you are well aware of this case which has received high profile media and public attention in Sweden, Australia and internationally," Stephens said in the letter. "I wish to convey the Australian Government's expectation that, should Mr. Assange be brought into Swedish jurisdiction, his case would proceed in accordance with due process and the provisions prescribed under Swedish law."

Ask has so far not replied to the email, but Swedish Prime Minister Fredrik Reinfeldt told CNN affiliate TV4 last week that it was "regrettable" how Assange's lawyers had described the Swedish judicial system in court proceedings.

Assange's attorney, Geoffrey Robertson, has argued that Assange would not receive a fair trial in Sweden. They argue that Swedish prosecutors have improperly leaked details of the case.

Robertson said remarks attributed to Reinfeldt have created a "toxic atmosphere" for Assange, who he said is viewed as "public enemy number one" in Sweden.

Assange's website, WikiLeaks, has published tens of thousands of once-secret U.S. documents on subjects ranging from the war in Afghanistan to the inner workings of U.S. diplomacy.

Assange's lawyers have raised the possibility that Sweden would hand over Assange to the United States if Britain extradites him to Sweden.