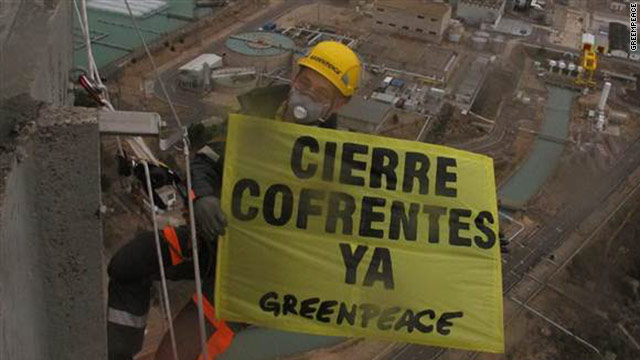 Greenpeace activists photograph themselves suspended from a tower at a nuclear power plant in Spain, February 15, 2011.
STORY HIGHLIGHTS
RELATED TOPICS

Madrid, Spain (CNN) -- Twenty Greenpeace activists entered a nuclear reactor compound in eastern Spain early Tuesday and several of them climbed a refrigeration tower to protest the use of nuclear power, a Spanish official and Greenpeace spokeswomen said.

The security breach occurred at the Cofrentes nuclear power plant at the town of Cofrentes in eastern Valencia province, where the activists painted the word "peligro," which means "danger," high up on the tower.

A spokeswoman for the Spanish government's main office in the Valencia region said the "vital" parts of the nuclear plant were not affected, were tightly secured and were operating normally.

A plant security guard was "slightly injured" by the activists as they entered. The guard was treated at the plant medical facility, the government spokeswoman said.

Greenpeace activists maintained a running blog on the environmental organization's website about the events, writing that the Greenpeace team entered the plant around 7 a.m. local time (1 a.m. ET) and that six of them scaled the 125 meter, or 400 foot, tall refrigeration tower.

The government spokeswoman, who by custom is not identified, said there might have been as many as 14 Greenpeace activists up on the tower. Others on the ground were quickly identified by security personnel and sent to a local courthouse.

Cofrentes, one of eight nuclear reactors in Spain, started operations in 1984. But its current 10-year operating license expires next March 20, Spain's nuclear regulatory body, the Nuclear Security Council, said on its website.

Greenpeace has long been known for its stance against the use of nuclear power.

Government officials did not immediately comment on how the activists managed to breach security at the Cofrentes plant. Due to previous Islamic terrorist attacks in Madrid and elsewhere in Europe, the Spanish government has repeatedly said it has a fine tuned security plan for its nuclear plants and other installations, such as dams, that are considered a priority to the nation's security.

Spain in 2007 generated only about 20 percent of its electricity from nuclear power; the rest coming from coal, renewable wind, solar and other sources.