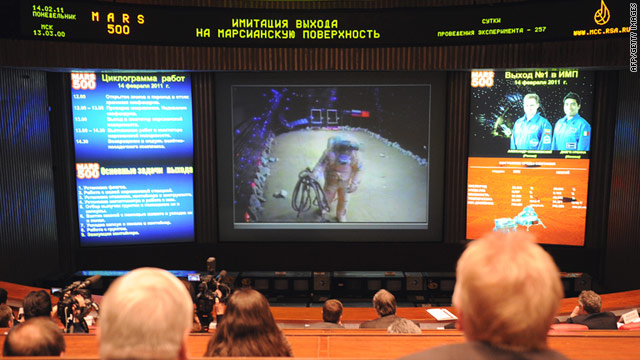 Journalists watch a mock walk on Mars of volunteers of the Mars500 experiment outside Moscow on Monday.
STORY HIGHLIGHTS

Moscow (CNN) -- Cosmonauts walked on the surface of Mars on Monday, nearly a year into a mission to the red planet. Unfortunately, it's only a simulation, designed to test what would happen on a real flight to Mars.

The project is an attempt to simulate the experience of a manned trip to Mars, with an international team of researchers locked in a windowless capsule for about a year and a half -- time required for a round trip to the next planet out in the solar system.

Starting in June of last year, the all-male "crew" of six -- three from Russia, one from France, one from Italy and one from China -- began spending 520 days in the cramped and claustrophobic conditions of a special facility in Moscow, following a strict regimen of exercise and diet.

They "landed" on Mars on Saturday, and on Monday, Russia's Alexander Smoleyevsky and Italy's Diego Urbina completed their first walk on the "Martian surface." The cosmonauts wore specially modified light-weight spacesuits for the 40-minute simulated walk.

"For centuries Europeans have been exploring the Earth, led by such people as Columbus and Magellan. Today, looking at the landscape of this red planet, I can imagine how exciting it would look with the eyes of the first person who steps his foot on Mars," Urbina said after he and Smoleyevsky planted flags of the four countries participating in the project into the "Martian surface."

Two other such walks are scheduled for Friday and February 22, according to Igor Ushakov, director of the Moscow-based Institute for Biomedical Problems, the main organization coordinating the project.

Organizers at the European Space Agency and Russia's Institute of Biomedical Problems hope the project will shed light on the physical and psychological effects of the long isolation that future Mars astronauts will experience.

"This study is not useful only for Mars, but also for life on Earth," Urbina, 27, said in a news release when the mission began last year.

The researchers communicate with Mission Control via the internet, with occasional disruptions and a 20-minute delay to imitate the effects of space travel.

They are performing tasks similar to astronauts at the international space station, such as maintenance and scientific experiments, but for a longer period of time.

They follow a seven-day week with two days off, except when special and emergency situations are simulated.

The latest isolation test is the last and longest part of the Mars500 experiment, which began in 2007.

The first phase was a 14-day simulation that mainly tested the facilities and operational procedures. The second phase followed in 2009, when four Russian and two European crew members were shut into the facility for 105 days.

Actual missions to Mars have thus far been unmanned.

Speaking at a press conference at Mission Control on Monday before the walk, Vitaly Davydov, deputy head of the Russian Space Agency, said that the "main task of the project is to determine the list of problems" that real space crews flying to Mars might be encountering.

He said such a manned flight to the planet could take place in two decades.

"Twenty years is a good time to prepare for such an expedition. I think it is quite realistic," he said, adding that no specific date for that is scheduled yet.