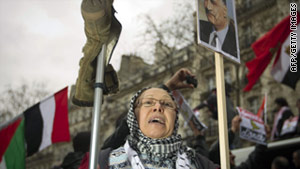 A woman holds a poster with a picture of former Egyptian President Nasser at a protest in Paris on February 5.
STORY HIGHLIGHTS
RELATED TOPICS

It's not clear how much effect the move will have on Egypt, which has been wracked by anti-government demonstrations for nearly two weeks.

France did not deliver any arms to the country between 2005 and 2008, according to a U.S. Congressional report.

The United States is Egypt's largest arms supplier by far, delivering $4.8 billion in weaponry to the country in that period.

China was second with $500 million in deliveries, according to the Congressional Research Service report, "Conventional Arms Transfers to Developing Nations, 2001-2008," published in September 2009.