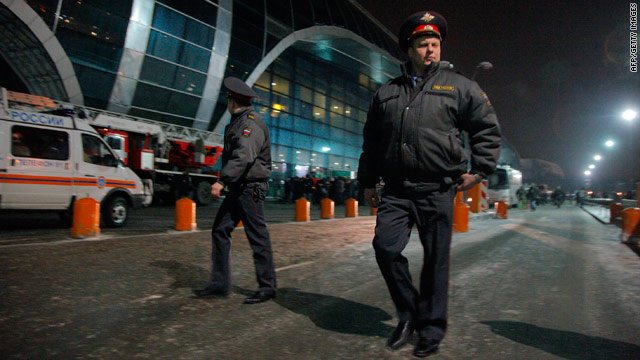 Share your iReport photos and video with CNN. Please don't do anything that could put you at risk.

The blast occurred around 4:30 p.m. at the entrance of the international arrivals section of Domodedovo Airport, the Itar-Tass news agency reported, citing a spokeswoman for the Russian Investigative Committee, Tatyana Morozova.

State TV aired video of the smoke-filled terminal, including what looked like bodies and luggage on the ground.

Where does airport blast leave security?

Russian Health Minister Tatyana Golikova said 35 people died in the blast and 93 people were hospitalized. Forty-one of those injured are in serious or critical condition, she said. Some people were given care outside of the hospital, while others were treated for hearing loss, fractures and smoke inhalation.

Earlier, the Russian National Anti-Terrorist Committee had said 35 people died and 152 were wounded in the explosion.

State TV, citing Russian authorities, said the attack was the act of a suicide bomber who stuffed a homemade bomb with small metal objects to make it more deadly, then activated it in a crowded area where many people were waiting for arriving passengers. CNN could not independently verify those claims.

A heavy police presence remained outside the airport hours after the explosion, and more than 10 ambulances left the scene with lights flashing and sirens screeching.

Domodedovo is 22 kilometers (14 miles) southeast of Moscow. According to the airport's website, it is the largest of Moscow's three airports, as well as the busiest in terms of passenger traffic.

It was not immediately clear who was responsible for Monday's blast, though previous terror attacks in Russia have been blamed on militants from the North Caucasus region.

In 2004, two airplanes that took off from Domodedovo exploded, killing at least 89 people in an attack linked to Chechen suicide bombers.

In March of last year, female suicide bombers linked to the group were accused of attacking subway stations in central Moscow during rush hour, killing some 38 people.

Golikova said Monday's blast and its aftermath were similar to previous attacks.

"This (character of injuries) is very similar to terror acts that we've seen recently. The types of wounds and the condition of the injured as well as what they communicate -- all this is very typical for those kinds of terrorist act situations, unfortunately," she said.

Elina Bakhtina told state TV she was at the airport cafe she owns when the explosion occurred.

"The blast must have been very strong, because our cafe is about 100 meters from the arrivals area. When we heard the blast, glass just started falling from the ceiling," she said.

Tatyana Papova, who was waiting at passport control when the explosion occurred, told state TV that escalators stopped working at the baggage claim area and airport employees started breaking down walls to help clear people from the area.

Incoming flights scheduled to land at Domodedovo were being diverted to Moscow's other airports, Sheremetyevo and Vnukovo, Russian TV said.

However, airport spokeswoman Yelena Galanova told Russian state TV that the airport was "operating as usual."

An airport employee, Andrei Surkov, told CNN that while the international arrivals area was closed, international passengers were being routed through the domestic terminal located on the other end of the airport.

Lufthansa spokeswoman Claudia Lange said the airline has suspended all flights to Domodedovo until further notice.

Members of the international community immediately offered their condolences and condemned the violence.

British Foreign Secretary William Hague said British officials are "in urgent contact with Russian authorities to establish the facts and to provide consular support to any British nationals who may have been affected."

According to preliminary information from Russian investigators, two British citizens were killed in the blast.

Read how the Moscow blast is expected to affect security worldwide

"To strike in the airport -- which is fundamentally believed and understood by many to be one of the most secure types of installations in a city or in a country -- to have such a devastating attack with such a tragic result, means that they had planned this considerably well and gone ahead in achieving their aims," he said.