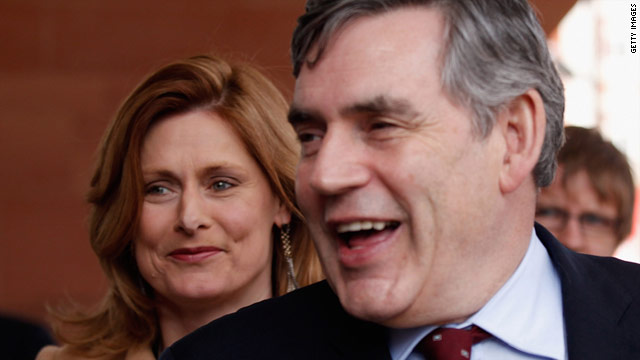 The Gordon Brown revelation comes amid an ever-widening scandal that has affected a number of celebrities.
STORY HIGHLIGHTS

London (CNN) -- Former British Prime Minister Gordon Brown wrote to the police last summer to ask if his voice mail had been hacked into, a source close to the situation told CNN Sunday.

The revelation comes amid an ever-widening scandal that has affected celebrities from model Elle MacPherson to members of the royal household, and forced the resignation of current Prime Minister David Cameron's spokesman on Friday.

Andy Coulson, who stepped down, was the editor of the News of the World newspaper in 2007 when its royal correspondent was convicted of hacking into voice mails.

Cameron said Friday that Coulson was quitting because "continuing pressures on him and his family mean that he feels compelled to do so. Andy has told me that the focus on him was impeding his ability to do his job and was starting to prove a distraction for the Government."

"Who Wants to be a Millionaire" host Chris Tarrant is among the celebrities suing the paper over the scandal, his lawyer Mark Lewis said.

Coulson, News of the World, and the Rupert Murdoch-owned media conglomerate that owns the paper have denied knowing of widespread phone hacking in search of dirt for stories.

The Metropolitan Police investigation into the scandal is now closed and results have been passed to prosecutors, police told CNN Sunday.

Police declined to say whether Brown had written to them or what action they took. A spokeswoman for Brown would not comment on the record. Brown was ousted as prime minister in May when his Labour Party was defeated at the polls.

News of the World royal reporter Clive Goodman and private investigator Glenn Mulcaire were sentenced to prison in 2007 for hacking into voice mails of members of the royal family's staff.

Mulcaire also admitted hacking into MacPherson's messages, among others.

The New York Times alleged in a detailed investigative story last year that -- far from Goodman and Mulcaire being lone culprits -- phone hacking was common practice at the newspaper.

The New York Times article in September prompted a furious response from a number of public figures, including former deputy prime minister John Prescott, who demanded that the police tell him if his phone had been hacked.

One of the few sources who went on the record in the Times article, former News of the World journalist Sean Hoare, said Coulson, then his boss at the tabloid, "actively encouraged me" to hack into the voice mails of public figures to get stories for the News of the World.

Coulson's allies have cast doubt on Hoare's credibility since the Times article came out September 1, pointing out that Hoare was fired from the paper over allegations of drug and alcohol abuse.

Witnesses associated with the paper insisted there was no evidence that phone hacking extended beyond the two who were found guilty of it.