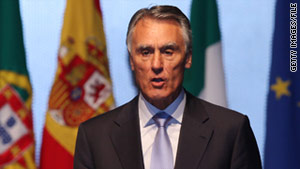 Anibal Cavaco Silva was first elected president of Portugal in 2006. He was re-elected to another five-year term Sunday.
STORY HIGHLIGHTS

Silva got 53% of the vote -- getting support from an all-important majority, making another election unnecessary -- according to state-run media outlets RTP and LUSA. He far outpaced his nearest competitor, Manuel Alegre, who was chosen on just under 20% of ballots.

Roughly 53% of Portugal's registered voters weighed in Sunday, despite inclement weather in parts of the southwestern European nation.

Silva has been president since March 9, 2006, when he won his first five-year term by besting four other contenders -- one of them being Mario Soares, who had served two terms as prime minister and one as president.

He will continue to team with Portuguese Prime Minister Jose Socrates, who was first elected in 2005 and backed by voters for another term four years later.

Together, they, government ministers and lawmakers face the daunting task of steering Portugal through a severe, prolonged economic crisis.

Like Greece and Ireland, there have been mounting concerns that Portugal will need a bailout from fellow European Union members and the International Monetary Fund because, due to its poor credit, it might not be able to pay for government operations through the usual borrowing measures.