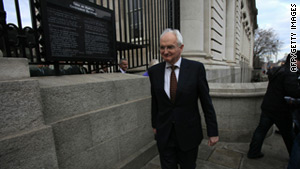 Green Party leader John Gormley walks out of the Government buildings after announcing the pullout.

(CNN) -- The Green Party has pulled out of Ireland's crumbling government, depriving it of a majority in parliament and likely forcing early elections.

The decision on Sunday comes a day after Prime Minister Brian Cowen announced he would not lead his Fianna Fail party after elections, sparking a race to succeed him.

On Thursday, Cowen called for new elections March 11, but the defection of the Greens from the governing coalition will probably push a vote up even sooner. Opposition parties say the election should take place next month.

Cowen's government has been under pressure since applying for an international financial bailout last year, after insisting it did not need one.

As he called for new elections, Cowen said he "deeply" regrets "that people are suffering and experiencing immense hardship because of this recession."

But, he said: "Our budgetary strategy has helped to stabilize our economy, and return it to economic growth."

He is trying to push through measures to cut Ireland's deficit, which runs into the billions of dollars after the government bailed out its banks during the financial crisis.

Irish prime minister steps down
The important thing now is the orderly completion of the finance bill in the interests of the country...
--Prime Minister Brian Cowen
RELATED TOPICS

The austerity measures and appeal for international financial aid have made Cowen and his government the focus of voter anger.

The Greens said Sunday that they would support the austerity package when it comes up for a vote in parliament, despite pulling out of the government.

Opposition parties hope the package will be pushed through the Dail, Ireland's parliament, this week, though Cowen said Sunday he saw that possibility as extremely unlikely.

"The important thing now is the orderly completion of the finance bill in the interests of the country, and then obviously we move to dissolution of the Dail and the general election," he said.

A new leader will be elected to replace Cowen at a special party meeting Wednesday afternoon. At least four senior Fianna Fail members have signaled that they intend to stand for the leadership post.

Social Protection Minister Eamon O Cuiv, who was recently appointed defense minister, and Mary Hanafin, minister for tourism, culture and sport and head of the government's Department of Enterprise, Trade and Innovation, have also joined the race to lead Fianna Fail.

Cowen cited internal criticism of his leadership as a factor in stepping down as ruling party leader.

"My attention now is to concentrate fully on government business and continue to implement the recovery plan," he said. "We must cast off the shroud of negativity."

Enda Kenny, leader of the main opposition party Fine Gael, said Saturday that Fianna Fail was now a "leaderless party with a powerless" prime minister and called for an immediate election.

Another opposition party, Labour, had already put forward a motion of no confidence in the government. That motion is due to be voted on Wednesday.

"It is simply not tenable for Mr. Cowen to remain on as (prime minister) as his colleagues in Fianna Fail squabble over the remnants of their party," said Labour leader Eamon Gilmore.

Cowen survived a vote of confidence from his own party members last week, but top rebel Martin, the foreign minister, opposed him and resigned Tuesday.

Cowen requested the loan in November after days of claiming Ireland did not need help.

The government went deeply into debt to bail out the country's banks during the financial crisis.

The goal of the aid, his Fianna Fail party said, was to return the nation's economy to sustainable growth and restore the health of its banking system.

Dublin is cutting 6 billion euros (nearly $8 billion) from its budget, as it tries to claw its way out of massive debt.