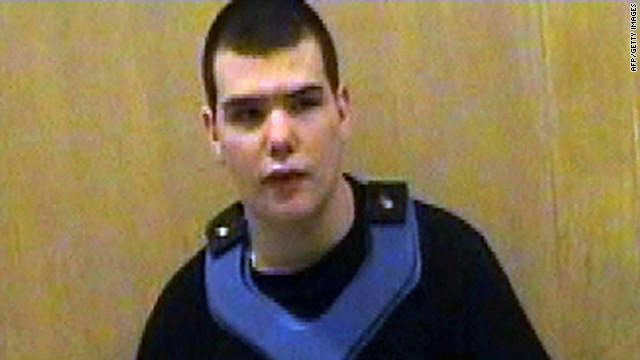 Brandon van Ingen, 18, spends part of his days tethered to a wall due to the danger he poses to others.
STORY HIGHLIGHTS

(CNN) -- A Dutch documentary about a mentally ill and potentially dangerous 18-year-old has prompted lawmakers in the Netherlands -- amid national outrage -- to re-examine the treatment of those in psychiatric care.

The documentary, which was produced by the Lutheran-run Evangelical Broadcasting Company and aired on public television Tuesday, followed Brandon van Ingen, a patient at a mental hospital in Ermelo. Since 2007, van Ingen has spent part of his days tethered to a wall due to the danger he poses to others, according to State Secretary for Public Health Marlies Veldhuijzen van Zanten-Hyllner.

"Brandon's issue is so serious that he must be restricted in his freedom for the sake of his own safety and that of others," van Zanten-Hyllner wrote in a letter to parliament. "Because of this, Brandon consistently makes use of a band that he fastens himself when he is in the presence of his attendants and other visitors. Whenever there is no one present and at night, the band is loosened."

In response to the documentary, the country's political parties held emergency meetings Wednesday to discuss care for the mentally ill.

Van Zanten-Hyllner addressed those meetings, explaining that van Ingen's care was in line with rules for restraining mental health patients, but promised to examine whether a change is needed.

He feels like a dog on a line.
--Van Ingen's mother
RELATED TOPICS

"The broadcast stirred me deeply," she wrote in the letter to parliament. "It is upsetting to see that such a young person, who has his life before him, has so little perspective for a better future."

Van Zanten-Hyllner noted that van Ingen, who apparently hears voices that tell him to do "bad and dangerous things," has his own apartment where he can move about freely.

The hospital is working on alternatives for van Ingen's care, van Zanten-Hyllner wrote, "and is undertaking constant efforts to improve the living situation."

The program "Outspoken" learned about Van Ingen's story from one of his caretakers at the hospital.

"I could no longer do these shifts," Iris Mourits said on the program. "Back-up shifts were OK, but being together with him in a room -- I think at some point he could sense that from the depths of my toes I could no longer see him on that leash."

Van Ingen's mother compared his care to that of a "caged animal."

Heerenloo hospital issued a statement Saturday assuring family members of those at the facility that van Ingen's case is an exceptional one and doesn't reflect the care the majority of patients receive.

Health care inspectors said Friday that they would "investigate the cases in which freedom is taken away from patients similar to Brandon's situation."

Van Zanten-Hyllner said there are about 40 cases similar to van Ingen's in the Netherlands.