Evidence retested in case of American convicted of murder in Italy

By Barbie Nadeau, for CNN 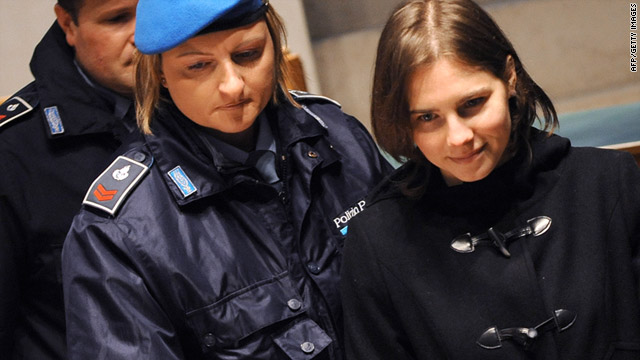 Amanda Knox arrives in court for her appeal trial in Perugia on January 22.
STORY HIGHLIGHTS

Perugia, Italy (CNN) -- Amanda Knox, the American convicted in December 2009 of the sexual assault and murder of her British roommate in Italy, is "cautiously optimistic" as she begins the lengthy appellate process in Perugia, Italy, her best friend Madison Paxton said on Saturday.

The experts' work begins on February 9 and they must conclude their analysis by May 9. Results will be presented to the two-judge and six layperson jury on May 21.

Carla Vecchioti and Stefano Conti, both professors of forensic science at La Sapienza University in Rome, will test the validity of the forensic results of two controversial forensic exhibits from Knox's trial.

The first is a knife found in Sollecito's apartment with Knox's DNA on the handle and what Perugia prosecutors say is Kercher's DNA in a tiny groove on the blade. The prosecution contends that the knife was used to stab Kercher in the neck and that it had been cleaned and the DNA matter attributed to Kercher consists of flesh, not blood.

The sample, however, was so small that forensic scientists investigating Kercher's murder were not able to double test it in accordance with international forensic science norms, which Knox's legal team says raises doubts about its validity.

Conti asked the Perugia judge if he and his colleague could disassemble the knife, removing the handle from the blade, to see if there is other forensic evidence that has not been tested.

Judge Hellman reserved the right to pass judgement on that decision until a later date, telling Conti that she could petition the court for permission to take the knife apart if necessary.

The second piece of evidence the forensic experts will test is the tiny metal clasp from Kercher's bra, which was cut from her body after her murder.

Forensic scientists in the investigatory phase determined that Sollecito's DNA is present on the metal clasp. The clasp was

identified on an investigatory video tape on November 2, 2007, when Kercher's body was found. But the clasp was not collected until nearly six weeks later, giving the defense cause to question whether the sample may have been contaminated.

Sollecito's DNA was also found on a cigarette butt in the house where Kercher was murdered, but nowhere else.

Jude Hellman ruled that testimony from several key witnesses could be heard during the lengthy appellate process. On March 12 and 26, the court will hear testimony from Antonio Curatolo, a homeless man who testified during the criminal trial that he saw Knox and Sollecito near the crime scene the night of the murder.

Curatolo, who is also facing trial on separate drug charges, said during the initial criminal trial that the same night he saw Knox and Sollecito he also saw student revelers waiting for shuttle buses headed to Perugia's discotheques.

Judge Hellman granted the defense's request to hear testimony from both the bus drivers and disco owners, who will testify

that the discos were closed the night Kercher was murdered because of the religious All Saint's holiday.

Hellman has not yet ruled on whether to hear testimony from Rudy Guede, the third man convicted of Kercher's murder. Guede chose a fast-track trial and was convicted in October 28, 2008 and sentenced to 30 years for his part in Kercher's murder.

Italy's high court ruled that Guede acted as one of three conspirators in Kercher's murder. Hellman has granted the prosecution the right to have the appellate court consider the high court ruling in Knox's and Sollecito's current appeal.

Knox's stepfather Chris Mellas told reporters in Perugia Saturday that Knox is hopeful that the appellate judge will overturn her conviction and send her home.

"She's doing well and is happy it's going her way," he told reporters in the courtroom. "But she is also apprehensive." The

court is not expected to make a final ruling on the appeal until next summer.