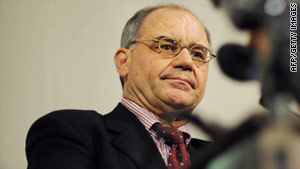 The economic crime unit of the County of Zurich issued an arrest order against Rudolf Elmer on Wednesday.
STORY HIGHLIGHTS

(CNN) -- The Swiss former banker who on Monday handed what he said were secret Swiss banking records to WikiLeaks, the website dedicated to revealing secrets, was arrested Wednesday, officials said.

The economic crime unit of the Attorney General's Office of the County of Zurich issued an arrest order against Rudolf Elmer on suspicion of violation of the banking law. He was taken into custody at 6:30 p.m. (12:30 p.m. ET), the attorney general said in a news release.

Elmer is a former director of Julius-Baer Bank's branch on the Cayman Islands. On Monday, in London, he gave two CDs to WikiLeaks founder Julian Assange.

"As Elmer has made public outside of the criminal proceedings, bank customer data is apparently on the CDs," the attorney general's news release said. "The attorney general's office is examining if Rudolf Elmer via the transfer of the CDs to WikiLeaks made himself culpable of an act against the Swiss banking law."

WikiLeaks could release the secret Swiss banking records in "a matter of weeks" if it can process them quickly enough, Assange said Monday.

Elmer said he would not reveal the names in the records. He said he was unable to say how many people were involved.

About 2,000 clients' records were included, he said, but because of the way trusts and corporations are set up, he could not determine how many individuals were involved.

Elmer describes himself as an activist/reformer/banker. "I think, as a banker, I do have the right to stand up if something is wrong," he said Monday, explaining why he was giving the documents to the website.

Elmer said he wanted "to let society know what I do know and how this system works, because it is damaging our society in the way that money is moved" and hidden in offshore jurisdictions.

He said the problems of offshore banking looked like "a mouse tail" when he first began to investigate them, but as he looked into banking practices in the Cayman Islands and Switzerland, it became a "dragon's tail" and finally a many-headed dragon.

Elmer aims to "challenge Swiss bank secrecy at the European Court of Human Rights and the Swiss courts," he says on his website. He has worked at six offshore banking centers and has been engaged in a long-running battle with Swiss banks over secrecy, he adds.

CNN's Ben Brumfield contributed to this story from Atlanta