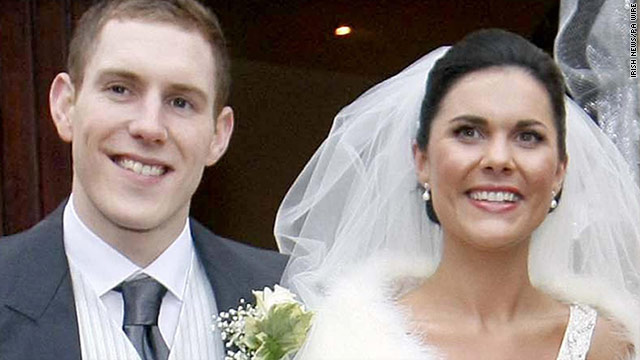 Michaela Harte-McAreavey was married to Gaelic footballer John McAreavey less than two weeks before she was killed.
STORY HIGHLIGHTS

Belfast, Northern Ireland (CNN) -- Final preparations are being made for the funeral Monday of slain Irish newlywed Michaela Harte-McAreavey.

The 27-year-old was found strangled in her hotel room on the Indian Ocean island of Mauritius last Monday. She was killed less than two weeks after her wedding.

Her funeral will take place Monday afternoon at the church where she married Gaelic footballer John McAreavey on December 30.

The president of the Republic of Ireland, Mary McAleese, will head dignitaries among thousands expected to attend a requiem mass at St. Malachy's Church, Ballymacilroy, Northern Ireland.

The Catholic primate of all Ireland, Cardinal Sean Brady, will be among senior clerics at a service led by McAreavey's uncle Bishop John McAreavey, who married the couple two and a half weeks ago.

Hundreds of people attended Harte-McAreavey's wake at the Harte family home in County Tyrone over the weekend.

Three suspects in her death are all employees of the luxury hotel where the newlywed was found strangled, according to the Mauritius Police Force.

Police said one of the men has confessed and participated in the reconstruction.

Authorities believe the men were inside the teacher's hotel room when she returned alone.

"We presume they were inside and burgling the room when the lady returned and were surprised and attacked her," Mauritius police Superintendent Yoosoof Soopun, who is leading the investigation, said last week.

Authorities said the killer used an electronic key card to enter the room.

The former beauty queen's husband was in the restaurant of the hotel when his wife was killed, and is not a suspect, Soopun said.

An autopsy showed that she died of asphyxiation.

Harte-McAreavey taught Irish at St. Patrick's Academy in Dungannon, County Tyrone, in Northern Ireland. She won the Ulster Rose of Tralee contest and participated in other beauty pageants.

She was the daughter of Tyrone Gaelic football manager Mickey Harte.