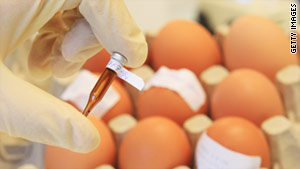 Authorities in Germany have filed criminal charges against the company at the heart of the country's tainted egg scandal.
STORY HIGHLIGHTS

Berlin (CNN) -- As the number of German farms closed because of possibly contaminated animal feed grew Friday, authorities said they had filed criminal charges against the company at the heart of the country's tainted egg scandal.

The company, Harles and Jentzsch, apparently knew for months that fatty acid it was delivering to animal-feed makers was

contaminated with dioxin, said Christian Seifert, a spokesman for the agricultural ministry in the German state of Schleswig-Holstein said.

Criminal charges have been filed against the company, Seifert said, "because they did not immediately inform" the agricultural ministry that dioxin levels surpassed the allowed amount.

Authorities allege that the company sold about 3,000 tons of contaminated fatty acids to dozens of companies making animal feed across Germany. The country's government has quarantined more than 4,700 pig and poultry farms.

Harles and Jentzsch laboratory tests from March 2010 showed they exceeded the ceiling level for dioxin, he said.

"At that point they had to stop delivering this product and immediately inform the authorities. They did not do either," Seifert said.

Government officials learned of the higher concentrations of dioxin in December, he said.

Several attempts to reach Harles and Jentzsch for comment were unsuccessful.

Police raided the company's offices Wednesday and confiscated documents, but arrested no one, the state prosecutor's office in Schleswig-Holstein told CNN.

Dioxin levels in the final feed product were diluted and likely did not exceed allowed amounts, Seifert said.

"Of course that is no excuse. The conduct is still wrong," he said.

Agricultural ministry investigators are continuing lab tests of samples taken from the company's premises, he said.

The 4,709 farms shut down include not only chicken and other poultry, but also pig farms, said Pierre Vetter, a spokesman for Germany's Ministry for Agriculture and Consumer Protection.

State authorities are quarantining all farms that received animal feed from companies affected, regardless of whether there is proof that the feed was contaminated, the ministry's website said.

"The state authorities are right to quarantine products -- eggs and meat -- that may have been exposed to contaminated feed, even if there is no concrete scientific evidence in all cases," German Agriculture and Consumer Protection Minister Ilse Aigner said in a statement.

About 130,000 possibly contaminated eggs were exported from a company in Germany to a food company in the Netherlands, where they were to be used in industrial food production, said Holger Eichele, a spokesman for Germany's Ministry for Agriculture and Consumer Protection.

The UK Food Standards Agency said a pasteurized mixture including some of the contaminated eggs was distributed in the UK.

"The mixing of the eggs will have diluted the levels of dioxins and they are not thought to be a risk to health," the agency said in a statement.

Dioxins are a family of toxic chemicals that share a similar chemical structure and have been characterized by the U.S. Environmental Protection Agency as likely human carcinogens.