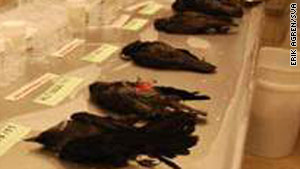 (CNN) -- A large number of dead birds were found in the city of Falkoping, Sweden, Tuesday night and Wednesday morning, according to a press release on the website of the Swedish National Veterinary Institute.

Necropsies were performed on five of the birds. The institute said they died due to "sudden, hard external blows," according to the press release. They had no signs of infection or other illnesses, and there were no external signs indicating what killed them.

"We have determined that the birds have died from severe internal bleedings caused by external blows," said the Institute's Marianne Elvander.

A similar unusual incident occurred in Arkansas on New Year's Eve. Thousands of red-winged blackbirds and starlings were found dead over a square-mile area in the town of Beebe.

Why did birds die in U.S.?
RELATED TOPICS

In a separate incident, some 500 red-winged blackbirds, starlings and sparrows were found dead Monday morning in the southern Louisiana community of Labarre.