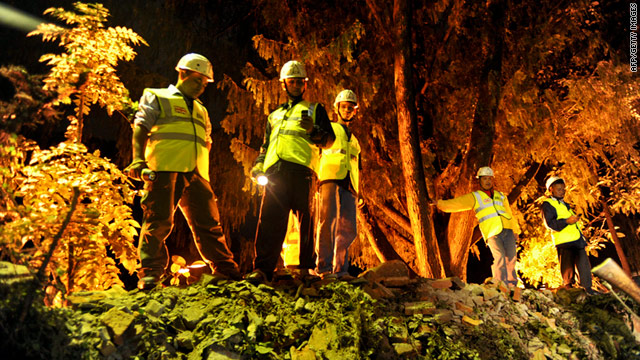 Nepalese personnel in Kathmandu stand on the rubble of a British Embassy wall that collapsed in Sunday's earthquake.
STORY HIGHLIGHTS

New Delhi (CNN) -- At least 18 people -- 13 in India and five in Nepal -- died when a magnitude-6.9 earthquake struck the northern Indian state of Sikkim near the border between the two nations Sunday night, local government officials told sister network CNN-IBN.

The dead include three in Nepal's capital of Kathmandu, who died when a wall of the British embassy collapsed, according to Kedar Rijal, Kathmandu police chief. They included an 8-year-old girl, her father and a third person.

The British Foreign Office confirmed a "compound perimeter wall" of the embassy collapsed, adding that its ambassador has met with the community and offered condolences.

Police said in a statement that two more people died in the Nepalese town of Dhara, about 217 miles east of Kathmandu. About a dozen people were injured when they jumped from their houses during the quake, police said.

On Monday morning, Sikkim's chief secretary Karma Gyatso said that seven people had died in that province, 65 suffered trauma and 33 had minor injuries.

Officials in other local governments reported additional fatalities in their provinces, significantly increasing the overall death toll from Sunday. The network said the dead include at least two Indian army personnel.

At least two buildings in Sikkim had collapsed and others developed cracks, Gyatso said Sunday. The damage was still being assessed as first-responders and others worked to find and help survivors, he said.

A day later, the Sikkim provincial official said that conditions had taken a positive turn.

Communications to stricken areas are "much better" now," said Gyatso, adding cell phone connections have also improved. He added that rescuers have reached most of the hardest-hit areas, with more emergency crews set to be deployed over the course of the day Monday.

Already, 300 civilians had been rescued in one such effort near Sikkim's border with China, said Indo-Tibetan Border Police spokesman Deepak Kumar Pandey. Some 22 tourists -- all of them Indians -- were also rescued in the same area.

The deaths, damage and recovery efforts came after a total of three quakes struck the region in rapid succession in a mountainous region.

The U.S. Geological Survey initially put the largest quake at 6.8 magnitude, later upgrading it to a 6.9, and the other two at magnitudes 4.8 and 4.6. All three occurred within an hour and 15 minutes, the U.S. agency said. The India Meteorological Department said the quakes were 6.8 magnitude, 5.7 magnitude and 5.3 magnitude.

The quakes set off landslides, which -- along with heavy rains -- were blocking roads and hampering rescue efforts, Pandey said. He expressed fears that the toll, as far as deaths and damage, could be more than is now known, anticipating more will be known once the sun rises Monday.

Emergency crews were dispatched from different locations to the region, India's home ministry said in an alert to reporters. At least four fighter jets were carrying rescue officers to a neighboring region, where they travel by road to Gangtok, Sikkim's capital, according to the alert.

As for outside help, World Vision announced Sunday that it "has put its emergency response team in India on standby" to provide relief as requested. The nonprofit organization reported that the quake cut off phone communication and electricity in parts of Sikkim and West Bengal provinces.

"The whole earth was shaking and it lasted for two minutes," Paul Mathai from World Vision, who was 130 kilometers (80 miles) from the epicenter, said in a statement from the organization. "We were panicked, but all of us are safe."

No tsunami warning was issued. The strongest earthquake, which struck at 6:10 p.m. local time (8:40 a.m. ET), was 12.2 miles below the earth's surface, according to the USGS.

That quake's epicenter was about 42 miles from the city of Gangtok and 169 miles east of Kathmandu, according to the geological survey.