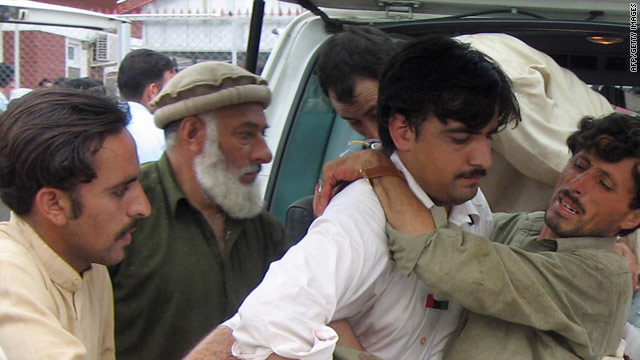 An injured bomb blast victim is carried to a stretcher after his arrival at a hospital in Tamir Graon.
STORY HIGHLIGHTS
RELATED TOPICS

Saleem Murrawat, the police chief of the Lower Dir district of Khyber Pakhtunkhwa province, said the ceremony was for a member of a pro-government anti-Taliban militia in the area of Jandol.

The chief said a suicide bomber blew himself up when he was standing with people at the procession. There are usually no security checks in such ceremonies. The chief said the bomber was around age 18.

Khyber Pakhtunkhwa and the neighboring tribal region have been havens for militants and there have been many insurgent attacks in the area -- close to war-torn Afghanistan.

On Tuesday, a school bus loaded with children came under rocket and small arms fire near Peshawar. The driver and three children were killed and 16 others wounded, police said.

The Tehreek-i-Taliban Pakistan group claimed responsibility for the attack, according to the group's regional spokesman, Mohammad Talha, who said it was in response to growing support for local resistance groups against the Taliban in the region.