The Haqqani Network, a family and a terror group 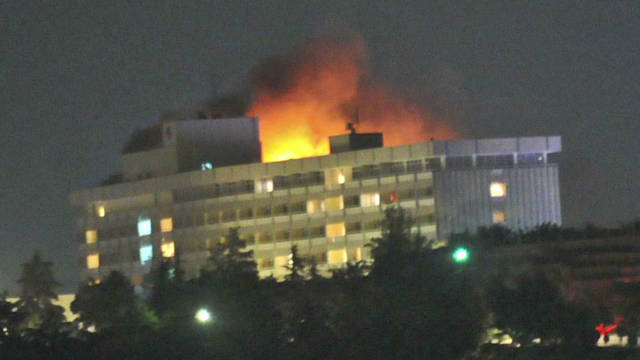 What is the Haqqani network?
STORY HIGHLIGHTS

(CNN) -- A senior U.S. official is blaming the Haqqani Network for this week's attack on the U.S. Embassy in Kabul, Afghanistan. If the group claims credit, it will be only the latest attack on its resume of terror.

The Haqqani Network, based in Waziristan, a tribal area of Pakistan, is aligned with the Taliban and al Qaeda and is considered one of the most significant threats to stability in Afghanistan.

U.S. Ambassador Ryan Crocker said he believes the Haqqani Network was behind the nearly daylong gun battle at the embassy this week. But Crocker said that the attack wouldn't change plans for the U.S. to draw down troops from the country by the end of 2014.

Since 2001, global security experts have said the Haqqani Network's calling card has been bold and complex suicide bombing attacks. For a more detailed analysis, West Point's Combating Terrorism Center lays out the Haqqani group and its objectives.

The Haqqanis are a family -- chiefly run over the years by patriarch Jalaluddin Haqqani, who would be in his 60s (if he's still alive, which is unclear). Jalaluddin's sons Salahuddin and Sirajuddin have reportedly taken more prominent roles in recent years.

Salahuddin told a journalist that there are nine siblings in the family, according to the Jane's security site. Six of the siblings were born to an Afghan wife, and three to an Arab wife.

Sirajuddin is most likely leading the group, several security reports say. He is considered the most radicalized and violent in the family.

Another U.S. military source, which Jane's did not name, described Sirajuddin as "very much into the global extremism of al Qaeda...He has got those ties [to al Qaeda] so he tends to be more violent than his father ever was."

Siraj, as he's known to intelligence sources, seems to have begun turning the Haqqani terror empire into a ruthless killing machine around 2007.

That year, Lt. Col. Dave Anders said in a press release: "Siraj is part of a younger, more aggressive generation of Taliban senior leadership that is pushing aside the formerly respected elders."

Several security experts and U.S. military officials say Siraj Haqqani has extended the Haqqani Network's reach to countries far from Pakistan and Afghanistan. The group has managed to recruit fighters in Chechnya and Turkey, for example, according to a November 2010 Jane's report.

To this point, there is a core power within Haqqani, but experts say that the network has survived for so many years because that core doesn't bigfoot its many commanders. The Haqqani Network is more macro-management than micro-management. They cultivate alliances. And the looseness of their organizational structure seems to have served them.

The Haqqanis also have reported links to Pakistan's Inter-Services Intelligence agency. In late April, the U.S. chairman of the Joint Chiefs of Staff Adm. Mike Mullen said on Pakistan's Geo TV that ISI has a "long-standing relationship" with the Haqqani Network.

A senior Pakistani intelligence official responded: "We do have a relationship: that of an adversary."

"We have made our resolve very clear that (the Haqqani Network) is an enemy we need to fight together," said the official, who did not want to be identified discussing intelligence matters.

Examples of carnage the network is believed to have orchestrated include:

-- The attack on the Serena Hotel in Kabul. In January 2008, a team of gunmen strapped with explosives stormed the popular hotel. In that attack, three gunmen with explosives "bluffed, shot and blasted their way through the hotel's security measures, terrifying Afghanistan's small international community in the process," according to Jane's.

-- The attack on the Hotel Inter-Continental in Kabul. On June 28, masked gunmen stormed a side entrance to the hotel, popular with journalists and Westerners. Six attackers detonated explosives; several were shot and killed on the rooftop of the building.

As an organized terror outfit, the Haqqani Network's roots go back to the father's emergence as a skilled fighter in Afghanistan's war against the Soviets in the 1980s.

The family is part of the Zadran tribe, which spans the Afghanistan-Pakistan border and stretches to Khost province. The United States military has described the Zadrans as warrior-oriented especially proud of trouncing their enemy in that war.

Jalaluddin garnered an impressively tough reputation as a mujahideen fighter at that time. Later, at the head of his terror group, he was described by several U.S. officers as a "mafia godfather," according to Jane's.

Jalaluddin Haqqani developed a relationship in the mid-1990s with Osama bin Laden when bin Laden began living in Afghanistan. That is according to bestselling Pakistani journalist Ahmed Rashid, who is regarded as one of the world's top experts on al Qaeda, the Taliban and Afghanistan.

An unnamed military intelligence source explained to Jane's in June 2009 that the Haqqanis would send politely worded but menacing letters to local tribes. The letters would inform the receivers that if they aided U.S. or coalition forces, the Haqqanis would kill them and their families.

"The line at the bottom of the intimidation letter is, 'You have no right to complain because we have warned you,' " the military source told Jane's.

The Haqqani Network reportedly is well-funded. Security analysts said the father raised funds shortly after the war with the Soviets by traveling throughout the Middle East, cashing in on his reputation as a formidable mujahideen fighter. According to Jane's, he also used connections achieved through his second wife, who is Arab. She either is living or has lived in the United Arab Emirates.