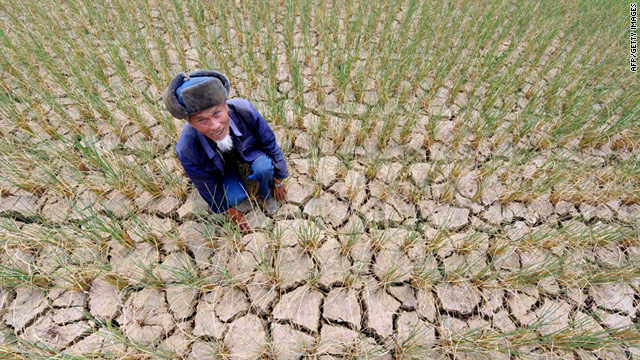 Beijing (CNN) -- A historic drought in southern China has caused billions of dollars in losses to agriculture and left millions of people and animals short of drinking water, government officials said Tuesday.

And with no significant rain forecast for the next 10 days, there's no relief in sight, according to the National Meteorological Center.

The impact of the drought, which began in June, is being felt across four provinces, affecting more than 44 million people, Ministry of Civil Affairs said. The direct economic loss is estimated at RMB 28.6 billion, or US $4.5 billion.

In Guizhou province, it's the worst drought in 60 years, affecting 21.5 million people, the ministry said. More than 7 million people and 3 million cattle are short of drinking water.

The drought has damaged 1.8 million hectares (4.4 million acres) of farmland, according to the ministry.

The Chinese government is ramping up aid for farmers impacted by the drought, the Ministry of Agriculture said. The Ministry of Finance will distribute relief funds.

Agriculture experts will be sent to the rain-starved areas to help farmers combat the shortfall of precipitation and see to the allocation of relief materials like seeds and fertilizers.