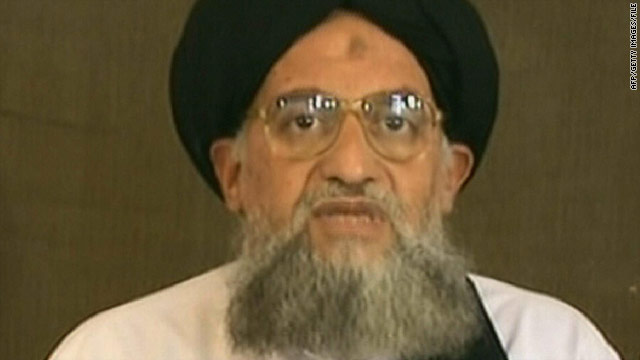 An image grab of Ayman al-Zawahiri taken from a video broadcast on Al Jazeera television in 2006.
STORY HIGHLIGHTS
RELATED TOPICS

(CNN) -- Al Qaeda leader Ayman al-Zawahiri has apparently released a new message to coincide with the 10th anniversary of the 9/11 terror attacks, in which he praises the Arab Spring as a "devastating blow" to the United States.

The hour-long video, posted Monday on websites run by supporters of the terror network, includes an audio broadcast purportedly from al-Zawahiri and a video message from Osama bin Laden, recorded before his death in May.

Al-Zawahiri's speech lauds the Arab Spring as having "liberated thousands of the members of the Islamic movement's prisoners, who were imprisoned by direct orders from America."

The uprising in a number of Arab nations, including Egypt, Tunisia and Libya, has also "liberated the Arab people from handcuffs of fear and terror," the message says.

The bin Laden video is apparently the same footage that was released by the U.S. government after bin Laden was killed in a raid by U.S. forces in Pakistan, but this one includes the audio of the former al Qaeda leader speaking.

The version issued by the Pentagon, after it was found in bin Laden's Abbottabad compound, was silent.

The SITE Intelligence Group cites bin Laden's message as warning Americans against "falling as slaves" to the control of major corporations and "Jewish money capital."

In his message, bin Laden also recommends that Americans read the book "Obama's Wars" by Bob Woodward, saying that they should realize that Obama's government has not lived up to his campaign slogan, "Yes we can."

At the time they released it, U.S. officials said they believed the video, which was entitled "A Message to the American People" and had not been broadcast by al Qaeda, was recorded in October or November last year.