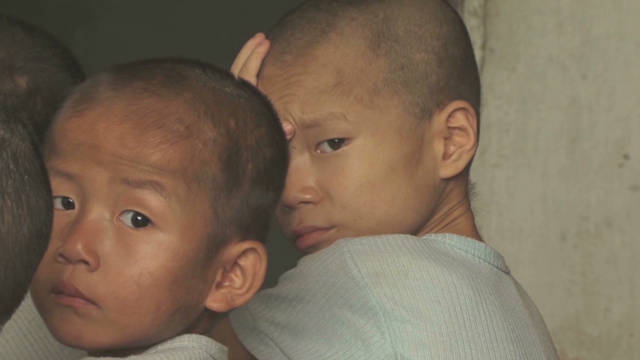 Seoul, South Korea (CNN) -- A four-year-old boy looks straight into the camera. His eyes are dull, his tiny legs crossed underneath him. Choi is an orphan, severely malnourished and too weak to stand.

This is just one of the heartbreaking sights captured on film by the United Nations World Food Programme (WFP) as they traveled around North Korea last month delivering aid to the most needy.

The most deprived are children -- WFP estimates a third of those under the age of five in North Korea are severely malnourished and says it will only worsen, if more aid is not delivered soon.

A pediatric hospital in South Hwanghae province sees a steady flow of young patients. The footage shows health care workers pulling on the mottled, loose skin of a crying child's stomach and another child on an intravenous drip. Many are suffering from diarrhea and skin disease from drinking polluted water.

A group of seven-year-olds are filmed sitting inside, huddled together, too weak to play outside, according to WFP. They look far younger than seven.

"There is a very high rate of children and also adults who are much shorter than you would expect them to be, and why does this happen, because it's a long story of suffering," says Claudia von Roehl, WFP's country director for North Korea.

The already dire situation in North Korea has been exacerbated by a bitter winter and a summer of record rains and floods. The crops of entire rice fields have been rotted by torrential rain. Kim Min-Won is a manager of a cooperative farm and tells WFP, "In Chongdan County, almost 60% of the rice crop has been lost."

Zogun Dong is a resident of Pongchon County. His house was destroyed by the summer rains. "My family and I barely survived when the roof collapsed during a recent storm," he tells WFP.

They now live under a plastic sheet held up by some rescued furniture.

North Korea has been asking for food aid for some time but the main concern among potential donor countries is how to ensure it reaches those who need it, as opposed to the leadership and military.

"The WFP is here in order to do fact-finding missions (and) to reliably tell the international community that their help is first of all needed, and second that it reaches the children that it's meant for," says von Roehl.

The United States sent $900,000 of flood aid earlier this month, including medical aid, blankets and cooking kits but is still deciding whether to send food aid.

A fact-finding mission headed by Ambassador Robert King, special U.S. envoy for North Korean human rights, visited the country in May and wants guarantees that any potential donations would be closely monitored.

The European Union announced in July it is giving $14.5 million in emergency aid to feed more than 650,000 North Koreans. European officials say they had negotiated an agreement with North Korea about how to monitor the aid.