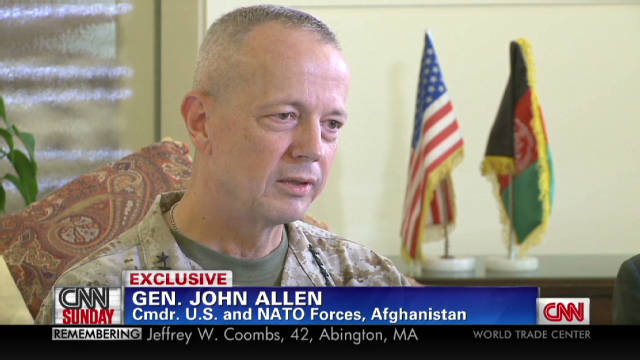 (CNN) -- All 77 NATO service members wounded in a Saturday attack against a coalition base in Afghanistan are U.S. troops, a spokeswoman for the International Security Assistance Force said Sunday.

Two Afghan civilians were killed and 25 others also were wounded in the attack, which occurred on the eve of the 10th anniversary of al Qaeda's attack on the United States on 9/11, U.S. Army Sgt. Lindsey Kibler said.

None of the injuries is life-threatening, ISAF said, and those wounded are expected to return to duties "shortly."

The truck bombing took place in the central-east province of Wardak, and those killed were Afghan laborers, said Shahidullah Shahid, the Wardak governor's spokesman.

The Taliban claimed responsibility for the assault. NATO's International Security Assistance Force confirmed the attack was carried out by a Taliban suicide bomber.

Allen said the attack indicates "much more what the Taliban are unable to do" than what they are able to do.

"They have been ejected from the population in so many places around the country that their only ability to influence the battlefield on many occasions is simply to go for a high-profile attack. And that's how we view this particular attack," he said.

Shahid said three people had died, while NATO said two. NATO also said 77 of its personnel were injured, while the provincial government said only 10 people were injured.

It is not uncommon for a local government and NATO to have varying accounts of an attack.

The attacker was driving a truck carrying firewood and detonated his explosives at an entry point to the base, ISAF said in a statement.

"Most of the force of the explosion was absorbed by the protective barrier at the outpost entrance and though there were a significant number of injuries ... none is immediately life threatening," the statement said.

In a video issued by ISAF on Saturday, Allen spoke about the 9/11 anniversary and the long war, saying that while "there is still much work to be done" in the fight against Taliban militants, "we will prevail." He also praised the troops from the 49 nations serving in the ISAF coalition.

The protracted war began just a month after the al Qaeda terror network, sheltered at the time by the ruling Taliban militants, attacked the United States on September 11, 2001. U.S.-led forces kicked off Operation Enduring Freedom in October and ousted the Taliban.

Coalition and Afghan troops have been fighting the tenacious Taliban militants in the Afghan-Pakistani region.

Allen noted that "September 11 marks the 10th anniversary of an event that changed the world."

Ever since that day, he said, the troops have crippled insurgents and have honored the victims of terrorism worldwide. He said the coalition is committed to making sure Afghanistan is never again a safe haven for al Qaeda.

"You have helped the Afghan people build their nation, a democratic government and an ever-strengthening security force," he said, saying Afghanistan has made advances in security, economic development and governance.

The coalition death toll in the war is nearing 2,700, according to a CNN count, with the United States sustaining most of the casualties in Operation Enduring Freedom.

August was the deadliest month for U.S. forces in Afghanistan since the conflict began. Seventy-one American troops died in August, topping July 2010, when 65 troops died, according to the CNN tally.

The surge in U.S. deaths comes as NATO is drawing down and handing over security control to national forces. Some 10,000 U.S. troops are scheduled to depart by year's end, with all U.S. military personnel out of Afghanistan by the end of 2014.