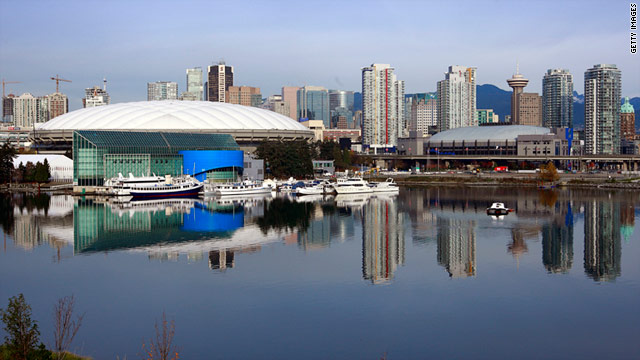 (CNN) -- [Updated 2:30 p.m. ET, Monday, September 5] Downtown buildings in Vancouver, British Columbia, can be seen in this photo from the south side of the False Creek inlet.

The Canadian city hosted the 2010 Winter Olympics and was recently labeled the "most livable city in the world" by the Economist Intelligence Unit.

Last week, a human foot was found near a False Creek marina, police said. It was the 11th time in four years that a foot has been found on a Pacific Northwest shoreline. Only one has been identified. The rest are a mystery.

"I don't know if you can look at this as just a coincidence," said Mark Mendelson, a Toronto forensics consultant and former police detective, on the TV program "Canada AM." "Why is it only happening on the west coast near Vancouver? ... Why are we only getting feet? Why are they in running shoes? ... Something is very, very strange here."

With regards to our photo challenge, "akelley67" was the first to correctly answer Vancouver. Bonus points go to "Frankeeee" for pointing out that it's an old photo "because the roof of that stadium (BC Place) has now been replaced with a retractable roof." Click here to check out the new look.