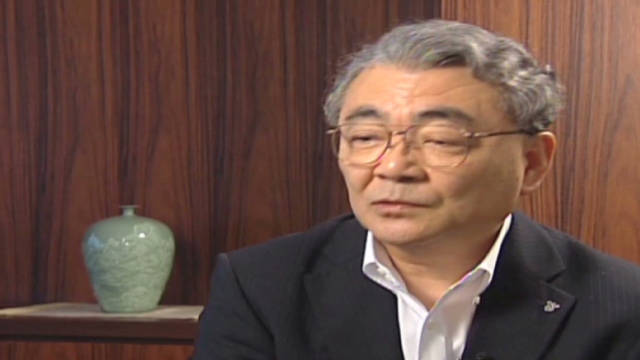 Tokyo (CNN) -- Efforts to stabilize Japan's Fukushima Daiichi nuclear plant, crippled by a March tsunami which triggered a nuclear crisis, are running ahead of schedule, according to the president of the Tokyo Electric Power Company, which operates the plant.

Toshio Nishizawa told CNN Monday he hopes to achieve the second phase of the shutdown before a January deadline.

"I cannot promise you, but if things go smoothly with careful control, it is possible to bring the cold shutdown forward," said Nishizawa.

Cold shutdown requires a stable winding down of the operations of the reactors at a temperature under 100 degrees Celsius (212 degrees Fahrenheit).

Emotional toll of the tsunami

Cooling systems at Fukushima Daiichi, about 240 kilometers (150 miles) north of Tokyo, were knocked out by the tsunami which followed a massive earthquake March 11.

The disaster triggered the worst nuclear accident since Chernobyl, as the cores of reactors 1-3 overheated and spewed huge amounts of radioactive contamination across the surrounding area.

In April, Tokyo Electric laid out a six- to nine-month timetable for winding down the crisis and bringing the reactors to a complete shutdown. Engineers are working to restore normal cooling in the three reactors that melted down, as well as working to pump out and decontaminate an estimated 100,000 tons of water that has pooled in the basement and service tunnels of the plants during months of emergency measures.

TEPCO's president said the most difficult issue at present is the radioactive water. "We just had a typhoon. With the torrential rain, more of polluted water is being produced. We must not leak highly radioactive water outside of our facility."

More than 75,000 residents of the area around the crippled nuclear plant are unable to return to their homes because of high radiation levels. Nishizawa said TEPCO's top priorities are to restore the nuclear plant and to compensate the victims.

The company has set aside more than $5 billion to cover victims' compensation costs, including lost income and mental distress. Japan's government has said it will provide further funds, creating a state-backed entity to meet the large quantity of anticipated claims.

TEPCO has struggled to meet energy demand since Fukushima Daiichi was closed following the disaster. The Japanese government has mandated power-saving measures throughout the summer.

Nishizawa said while the company is committed to boosting energy generation from fossil fuels and renewables, the supply will not return to normal without the restart of its nuclear facilities that were not affected by the earthquake.

"I believe restarting the nuclear power plants is necessary to stably supply the energy to our users," he said. "We must effort for the restart. It is the most important thing for that is to show the people that Fukushima's situation is stabilized and the issue has come to the end. This is our responsibility."