U.S. official: Al Qaeda's No. 2 has been killed 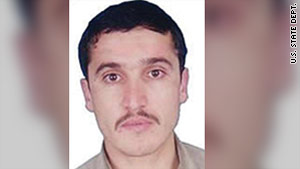 The official would not discuss the circumstances behind his death, but did say Rahman is a key loss for al Qaeda.

"There's no question this is a major blow to al Qaeda. Atiya was at the top of al Qaeda's trusted core," the official said. "He ran daily operations for the group since Shaykh Sa'id al-Masri was killed last year, and has been (Osama bin Laden successor Ayman al-Zawahiri's) second-in-command since bin Laden's death in May."

Rahman's death will affect al Qaeda's ties to its affiliates, as well as Zawahiri's ability to gain complete control over the terrorist group, the official said.

"Atiya was the one affiliates knew and trusted, and he spoke on behalf of both (bin Laden and Zawahiri). He planned the details of al Qaeda operations and its propaganda.

"His combination of background, experience and abilities are unique in al Qaeda -- without question, they will not be easily replaced," the official said.

"Zawahiri needed Atiya's experience and connections to help manage al Qaeda. Now it will be even harder for him to consolidate control," he added.

Zawahiri took control of al Qaeda after bin Laden was killed in a clandestine U.S. raid in Pakistan in May. Rahman used to be bin Laden's operations chief.