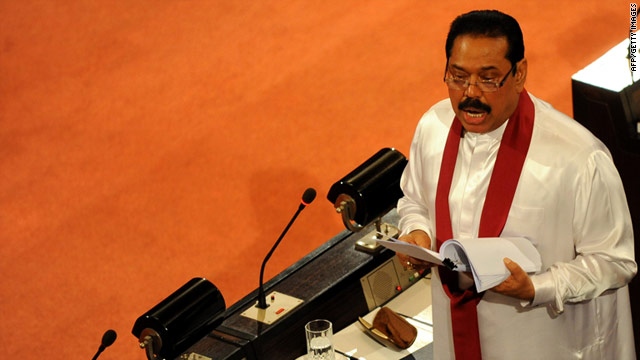 Sri Lankan President Mahinda Rajapaksa told Parliament earlier in the day that the emergency will come to an end, but failed to specify an exact date.

Rajapaksa will not sign a proclamation renewing the state of emergency when the current one ends on August 31, the spokesman said. He noted, however, that in accordance with Sri Lanka's constitution, the emergency would continue for another two weeks.

"Extension beyond that period will require parliamentary approval, but that will not be sought," he said.

Rajapaksa made the announcement during an unscheduled appearance before Parliament. He noted that since 2009 -- when the Tamil Tiger rebels were defeated -- there has "not been a single terrorist attack."

The declaration came shortly before the United Nations Human Rights Council is expected to take up Sri Lanka's case, which focuses in part on allegations of mass arrests and detentions by the government.

The council's 18th session begins in Geneva, Switzerland, on September 13.

Several countries -- including the United States, the United Kingdom, and India -- have called for a conclusion to the state of emergency.

"The United States welcomes President Rajapaksa's announcement in Parliament that the Emergency Regulations will lapse at the end of August," the U.S. Embassy in Colombo said in a written statement. "This is a significant step towards normalizing life for the people of Sri Lanka."

In terms of Sri Lanka's constitution, a declaration of a state of emergency by the minister of defense -- who is also the president -- for a period of over two weeks requires the approval of Parliament. The current phase of the state of emergency was introduced in 2005 after Tamil Tiger rebels assassinated Foreign Minister Lakshman Kadirgamar.

Since that time, the prime minister has sought an extension of the emergency on a monthly basis.

Controversy over the state of emergency heightened after a three-member U.N. panel said that both government troops and Tamil Tiger rebels committed war crimes during the final stages of the separatist war. While Sri Lanka's government insists that a locally appointed Lessons Learnt and Reconciliation Commission is probing the matter, the United States, Britain and the European Union have called the commission's mandate inadequate and are pressing for an international inquiry.

Sri Lankan opposition leader Ranil Wickremesinghe, who heads the right-wing United National Party, told Parliament that the withdrawal of the state of emergency alone would not help. He said there are "other measures" the government should adopt "to restore democracy."