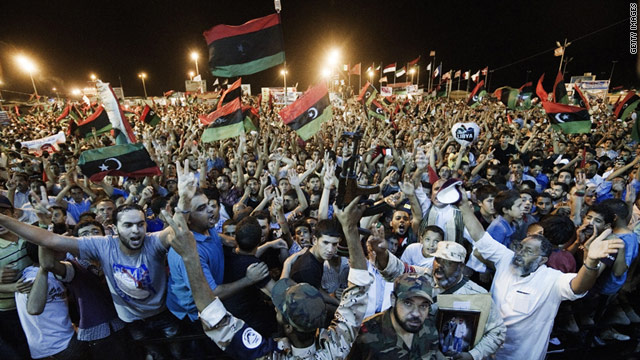 Thousands of Libyan rebels in the eastern stronghold of Beghazi celebrate the rebel incursion in the capital, Tripoli. South Korean construction companies are celebrating, too.
STORY HIGHLIGHTS

(CNN) -- As the regime of Moammar Gadhafi crumbled, the value of South Korean construction firms rose.

"China doesn't drive the German economy, but when China manufacturing is up, German machine manufacturers are selling more products to China," Simpfendorfer said. "Much of the Korean construction companies have been involved in Libya and the Middle East in a big way for the past decade."

Libya's assets and how to move forward

South Korean construction companies have symbolized the growth of the world's 12th largest economy and its growing prowess on the global stage. For example, Samsung Construction built the world's tallest building the Burj Khalifa which opened in 2009 in Dubai, as well as previous record holders the Petronas Towers in Kuala Lumpur and Taipei 101 in Taiwan.

Libya is a major business partner to South Korea, and trade has been hard hit by the Libyan conflict. While exports to Libya reached $1.4 billion last year, exports dove nearly 88% the first seven months of the year, according to the Korea International Trade Association.

Korean companies account for one-third of all foreign business in Libya according to the Korea Trade-Promotion Agency, KOTRA, working on projects worth some $36.4 billion at the start of this year.

When violence first erupted, the South Korean government helped with the evacuation of almost 1400 workers working on 300 different building sites.

When violence first erupted, the South Korean government helped with the evacuation of almost 1400 workers working on 300 different building sites.

The Foreign Ministry tells CNN that the rebels' National Transitional Council verbally assured Seoul in June it would honor existing business contracts signed with the Ghadafi regime. In July, the Unification Ministry sent a delegation to Libya to secure written assurances.

As Libyan rebels solidified their gains in Tripoli Tuesday, Seoul's Ministry of Land, Transport and Maritime Affairs had an emergency meeting with 21 Korean construction companies with projects in Libya to chart out a path to re-enter the embattled nation, according to Korea's Arirang TV.

Seoul has already donated $1 million since March to the NTC through the World Food Program.

KOTRA predicts large construction projects in areas like Benghazi, the second largest city in Libya and a traditional anti-Ghadafi region. Benghazi is considered undeveloped compared to other cities in the country.

Seoul's travel ban on South Koreans visiting Libya was reviewed Tuesday by the government but remains in place.