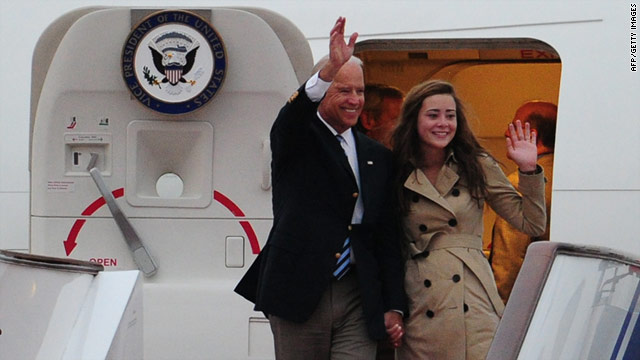 Biden comes at the invitation of Vice President Xi Jinping as part of planned reciprocal visits by the two nations' vice presidents, according to a White House statement.

Biden is expected to hold extensive talks with Xi.

Political analysts say Biden's trip is an opportunity for American officials to know Xi, who is considered a likely successor to President Hu Jintao.

Says Kenneth Lieberthal, senior fellow at Brookings Institution in Washington: "Biden needs to have some serious relationship with and understanding of Xi Jinping, who is very likely to be the next head of the party, the military and president of the government of China. I think Biden is looking forward to spending literally hours with Xi and then to host him back in the U.S., just to begin to see and understand about the way he thinks, what his priorities are, what he is passionate about."

On Friday, he will travel to Chengdu, the capital city of Sichuan province, accompanied by Vice President Xi.

He will give speech at Sichuan University and visit Dujiangyan, an ancient dam, and a high school rebuilt after the devastating earthquake in 2008.

Biden is also expected to have an informal dinner in a local restaurant with Xi, an unusual arrangement by Chinese protocol's standards in receiving top foreign officials.

This is Biden's third trip to China since 1979, when he came with the first Senate delegation to visit the country after the normalization of diplomatic relations.

Biden's talks in Beijing are expected to focus on the debt crisis in the United States.

As the biggest overseas holder of U.S. treasury bills, China seeks Washington's reassurance that the U.S. debts are secure. Says Lieberthal: "There are many in China who are very critical of their own government for investing as heavily as they have in U.S. treasuries. There is a genuine concern in China about how the U.S. economy will function, how the U.S. dollar will do, how strong U.S. import demand is likely to be. They'd be extremely interested to hear his views on what is likely to happen in the U.S. and our economy."

Danny Russell, senior director for Asian affairs at National Security Staff, said Biden and his Chinese interlocutors are expected to tackle a range of security and economic issues, including North Korea and Iran's nuclear weapons programs and security issues in East Asia. "Naturally, there are issues that the Chinese themselves typically raise like Taiwan and Tibet. And there are issues that every senior official who meets with Chinese leaders is going to raise, like human rights," Russell said.

Lieberthal said Biden will also be keen to learn more about what is going on with China's economy. "All the press has been focused on the U.S. economy, but the Chinese economy has its own very serious challenges," he said. "The vice president will wish to get a feel for, if you will, the political economy of China, how politics and the economy inter-act and therefore what to expect in China, because how China fares has direct impact on those concerned with the U.S. economy."