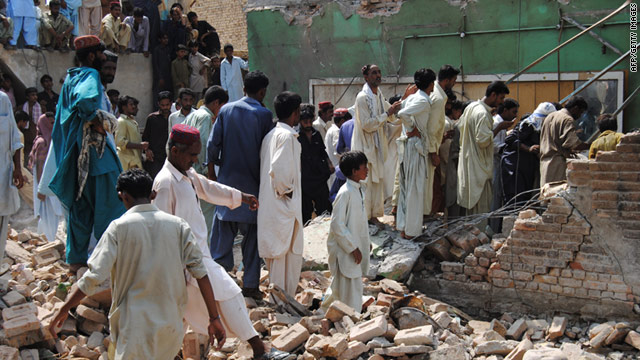 Pakistanis walk through a restaurant destroyed by a bomb in the town of Dera Allah Yar on Sunday.
STORY HIGHLIGHTS
RELATED TOPICS

The incidents took place as Pakistan celebrate its Independence Day.

The bomb was planted inside a hotel in Dera Allah Yar, a town in Balochistan province, said police official Israr Umrani.

Dozens of people were inside the hotel when the blast took place, Umrani said. In addition to those killed, another 14 were wounded.

There was no immediate claim of responsibility.

Balochistan is Pakistan's largest province but also its poorest and most sparsely populated. In recent years, the province has been plagued by sectarian violence and separatist Baluch militant groups who demand political autonomy and a greater share of profits from the province's natural resources.

The earlier attack Sunday took place at the Tochi Scouts camp at Miranshah in North Waziristan. The rockets struck while the paramilitary group was preparing for an Independence Day parade, said Maj. Niaz Khan.

In addition to those killed, 25 people were wounded, Khan said.

The Tochi Scouts are a federally-controlled paramilitary force that has been primarily recruited from Pakistan's tribal areas bordering Afghanistan.

Pakistan celebrates its independence every year on August 14, the day it was made an independent country based on borders created by the British as they ended their colonial rule in India.

CNN's Reza Sayah and Aliza Kassim contributed to this report.