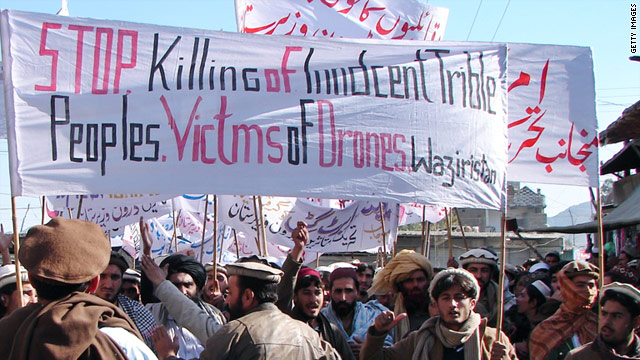 A new report suggests 168 children have been killed in U.S. drone strikes in Pakistan since 2004.
STORY HIGHLIGHTS

Washington (CNN) -- A senior U.S. official is dismissing a report that says covert American drone strikes in Pakistan have killed 385 civilians, nearly half of them children, saying the findings by the London-based Bureau for Investigative Journalism are faulty and uncorroborated.

The response by the official late Thursday follows a report released this week by the nonprofit group, which includes British and Pakistani journalists, that found CIA covert drone strikes since 2004 killed at least 2,292 people. Of those killed in the strikes, the group said it had credible reports of at least 385 civilians, including 160 children.

"The numbers cited by this organization are way off the mark," the official told CNN. The official spoke on condition of anonymity because of the sensitivity of the drone program.

According to the senior U.S. official, an estimated 2,000 militants and 50 civilians have been killed in strikes since 2001. Since May 2010, the strikes have killed 600 militants, the official said.

"In that same period of time, we can't confirm any noncombatant casualties," the official said.

The Bureau of Investigative Journalism defended its report in a statement to CNN on Friday, calling it "the most accurate public record yet of the CIA's drone strikes."

"All of our sources are credible and transparent, and where contradictory information exists, we make that clear," its editor, Iain Overton, said. "It is unfortunate that instead of engaging with our work, the CIA sees fit to smear it."

American drone strikes in Pakistan have inflamed tensions between the two countries, especially after attacks in which civilians were killed. The U.S. official's figures echo similar ones cited in June by White House counterterrorism adviser John Brennan.

The Bureau for Investigative Journalism is a non-profit organization launched in 2010 that often works with other news organizations to produce stories. Its reporting on European Union spending won awards from the U.S. Investigative Reporters and Editors association and Thomson Reuters.

Its estimate is within the range calculated by the New America Foundation, a Washington think tank that has been tracking the drone campaign. It puts the number of non-militant deaths in those strikes since 2004 somewhere between 239 and 471, based on reliable press accounts.

That figure is about 20 percent of the 1,600- to 2,500-plus deaths the foundation attributes to the remote-controlled bombardment, though its 2010 figure dropped sharply to about 5 percent.

U.S. officials rarely discuss publicly the CIA's drone program in Pakistan, though privately, officials have said the covert strikes are legal and an effective tactic in the fights against extremists.

But the allegations by the Bureau of Investigative Journalism spurred reaction from U.S. officials, who are mindful of often violent reaction in the region to allegations of civilian casualties.

"To that end, President (Barack) Obama has directed that we be exceptionally precise and surgical in addressing the terrorist threat, relying both on rigorous review procedures and all of the technological tools at our disposal to ensure that innocent civilians are protected," said Victoria Nuland, a State Department spokeswoman.

"We try to ensure that we only use force against those individuals who threaten us."

The Bureau for Investigative Journalism findings are published in a 22,000-word database that lists details of each drone strike as compiled from news reports, researchers and lawyers examining drone attacks and leaked U.S. intelligence reports and diplomatic cables. Among the group's findings: More than 1,100 people were injured in the 291 drone strikes known to have taken place since 2004.

The group also reported that of the 291 drone attacks, at least 236 have been ordered since Obama was named president. Of the at least 2,292 people reported killed, at least 1,842 were killed in strikes since Obama took office.

Brennan, the counterterrorism adviser, has said the Obama administration wants to follow a strategy of drone strikes and targeted raids against terrorists to avoid prolonged wars.

But the senior U.S. official said the research was suspect in part because it relied on information from a questionable source.

"One of the loudest voices claiming all these civilian casualties is a Pakistani lawyer who's pushing a lawsuit to stop operations against some of the most dangerous terrorists on the planet," the official said.

"His evidence, if you can call it that, comes from a press release. His publicity is designed to put targets on the backs of Americans serving in Pakistan and Afghanistan. His agenda is crystal clear."

While the official did not name the Pakistani lawyer, it was believed to be Shahzad Akbar -- who is suing the CIA to stop the drone strikes. But the journalism organization called Akbar "a single source among many on only 10 strikes of some 291 the Bureau examines."

"Where Mr. Akbar's information is contradicted by other sources, we make that overtly clear in our research," Overton said. "To suggest, as U.S. counterterrorism officials are, that he is a 'major source' for our data is simply untrue."

Akbar told CNN on Friday that he met three times with one of the group's journalists, who reached out to him to cross-check statistics on drone strikes. He dismissed allegations that his work was suspect.

"My complaint is not against Americans serving in Pakistan and Afghanistan. My concern is that we must have some accountability for civilian deaths," Akbar said.

"I am not saying that drone strikes must stop. My complaint is that you have to be accountable for civilian deaths. There are no checks on how many civilians are killed. This is what concerns me and other Pakistanis who want to end fundamentalism in Pakistan. Civilian deaths in drone strikes are fueling extremism."

Akbar drew the ire of U.S. officials in December when he released the name of the CIA's station chief in Pakistan, part of his campaign to end the drone strikes.

"I didn't do anything wrong by naming the CIA station chief in Islamabad," Akbar told CNN. "I don't care that the Pakistani government gave him consent to come here. They don't have the authority to give them consent."