Dissident Chinese artist defiant in first interview since his release 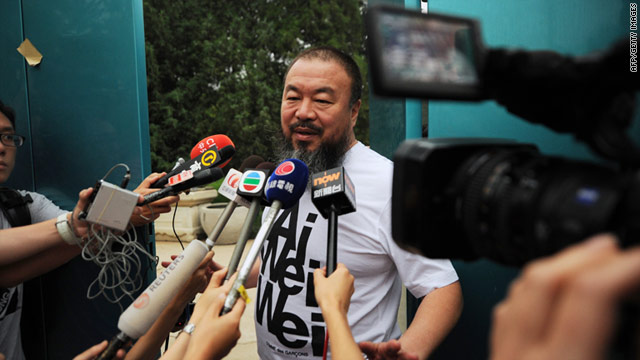 Outspoken Chinese artist Ai Weiwei to speaks to reporters outside his studio in Beijing after his detainment by Chinese authorities.
STORY HIGHLIGHTS

(CNN) -- Chinese dissident artist Ai Weiwei pledged to continue fighting injustice in his first interview since his release from detention.

The outspoken critic of the nation's human rights record was arrested in April, detained for three months and charged with tax evasion.

"Of course you might live an easier life if you abandon some rights. But there are so many injustices, and limited educational resources," Ai told the Chinese Communist party's Global Times newspaper. "They all diminish happiness. I will never stop fighting injustice."

The paper describes Ai as "feisty" in his first interview since being released from prison in June after a three-month detention on tax evasion charges that some observers alleged were trumped up.

A condition of his bail forbids him from using Twitter, the newspaper said, but the artist has been outspoken on the social media platform.

The tweets linked to pictures, including one of feet on a scale reading 214 pounds, and another one of Ai and an unidentified male peering into the camera.

The playful tweets ended Monday night when he wrote about business colleagues detained with him.

"Today I met Liu Zhenggang. He talked about the detention for the first time. ... This steel-willed man had tears coming down. ... He had a sudden heart attack at the detention center and almost died."

Later, he tweeted, "Because of the connection with me, they were illegally detained. Liu Zhenggang, Hu Mingfen, Wen Tao and Zhang Jinsong innocently suffered immense mental devastation and physical torment."

Ai confirmed to CNN on Wednesday that he wrote the tweets, saying "a bird needs to flutter its wings to see if it can fly."

The activist was detained at the Beijing airport on April 3 while awaiting a flight to Hong Kong. Police cordoned off his Beijing studio, and an assistant told CNN that eight employees had been called in for questioning.

Ai was released June 22, and Beijing police told the state-run Xinhua news agency that he had confessed to his crimes.

"The decision (to release Ai) comes also in consideration of the fact that Ai has repeatedly said he is willing to pay the taxes he evaded," Xinhua reported.

However, in July, a company that Chinese authorities say is controlled by dissident artist Ai Weiwei challenged tax evasion allegations.