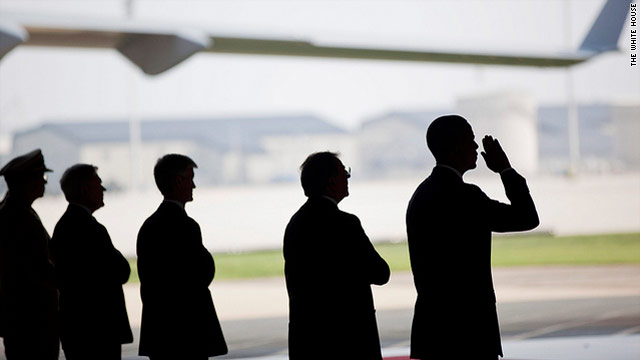 Washington (CNN) -- President Barack Obama and top Pentagon officials including Defense Secretary Leon Panetta and Joint Chiefs of Staff Chairman Adm. Mike Mullen attended Tuesday's dignified transfer of the remains of 38 U.S. and Afghan personnel killed on board a helicopter shot down in Afghanistan over the weekend.

Obama boarded both of the planes that transported the remains to the Dover Air Force Base in Delaware to pay his respects and later joined Panetta, Mullen and U.S. Special Operations Commander Adm. William McRaven in meeting with more than 200 family members and colleagues of the slain service members at a building on the air base, according to background information provided by White House staff members accompanying the president on the trip.

Panetta, Mullen and the chiefs of the Navy and Army were among the 11 senior military and Defense Department officials who also attended the dignified transfer, Pentagon spokesman Col. Dave Lapan said.

Because the catastrophic nature of the crash made the remains difficult to identify, all were brought in more than 38 transfer cases to the United States, Lapan said. The Afghan remains will be returned to their families once identifications can be made.

The slain U.S. service members represent the worst single-incident loss of American life since the start of the Afghan war. Thirty Americans died in the crash, including 22 Navy SEALs, military officials said.

Two U.S. military officials said Tuesday that Panetta has been asked by Special Operations commanders not to release the names of the slain Navy SEALs because they belonged to a covert unit.

Even though many of the families have come forward and publicly identified their loved ones, the concern is that families and friends could be tracked down if they are identified, the officials said. According to the officials, they cannot recall a time when names were not released 24 hours after next of kin were notified following an incident.

Initial reports on the incident said it occurred when a U.S. Army Ranger unit became pinned down by insurgents in the rugged Tangi Valley area of Wardak province in central eastern Afghanistan.

The group called in assistance but instead had to race to the crash scene of a downed NATO helicopter carrying their reinforcements, officials said Monday.

Everyone inside the CH-47 Chinook helicopter was killed, NATO reported.

However, a U.S. military official confirmed Tuesday that the SEALs were called in as an 'immediate reaction force" when the Army Rangers who were on the ground in a firefight saw some Taliban break off and begin to escape.

The Rangers wanted the SEALs to go after those insurgents, the official said, adding the Rangers were "not pinned down" but simply wanted more combat power.

The inbound helicopter transporting the SEALs also carried a civilian interpreter and seven Afghan troops, and it crashed after being "reportedly fired on by an insurgent rocket-propelled grenade."

Van Williams, the public affairs chief for Air Force Mortuary Operations, said all of the 38 sets of remains were "unidentifiable."

"The crash they were in was so horrific and the state of remains such that there was no easy way to see this was this person or this was that person," Williams told reporters.

In a typical dignified transfer ceremony, family members and military carry teams board the plane, Williams said, adding that a chaplain may be asked to speak.

The carry team then picks up the transfer case, and the command is given to render honors, according to Williams. The official party and everyone within earshot salutes as the remains are taken from the aircraft to a waiting vehicle for transport to the mortuary, where positive identification occurs, he said.

"For us ... it is a very big source of pride and a sense of duty and honor that we give to the fallen service members and their families," Williams said. "We represent the nation, and a grateful nation at that."

In an earlier statement, the commander of the International Security Assistance Force in Afghanistan, Gen. John R. Allen, paid tribute to the fallen.

"In life they were comrades in arms, and in death they are bound forever in this vital cause. We cherish this selfless sacrifice," Allen's statement said. "Today, as we pay our respects to these magnificent troops, we recommit ourselves for the future, and for the freedom, peace and stability of Afghanistan."

Obama has been meeting with U.S. military officials about the incident and spoke with Afghan President Hamid Karzai by phone Sunday.

"We will press on, and we will succeed," Obama said Monday, adding that "now is also a time to reflect on those we lost" and on the sacrifices of all who have served, as well as their families.

"Their loss is a stark reminder of the risks that our men and women in uniform take every single day on behalf of their country," Obama said, discussing the incident at the end of televised remarks focused on the economy.

Until Monday, military officials had been largely tight-lipped about the circumstances surrounding the crash, which occurred roughly 60 miles southwest of Kabul.

Several militants were killed in the gunbattle, officials said. Coalition troops called in additional forces to assist in the operation as the firefight continued.

"The recent fighting season has not materialized as the insurgents had predicted," NATO spokesman Brig. Gen. Carsten Jacobsen told reporters in Kabul. "But the insurgents are resilient and far from defeated."

An investigation is under way, Jacobsen said.

On Tuesday, the commanding general at U.S. Central Command, James Mattis, announced in a statement that U.S. Army Brig. Gen. Jeffrey Colt was investigating the circumstances surrounding the crash.

CNN's David Ariosto and Barbara Starr contributed to this report.