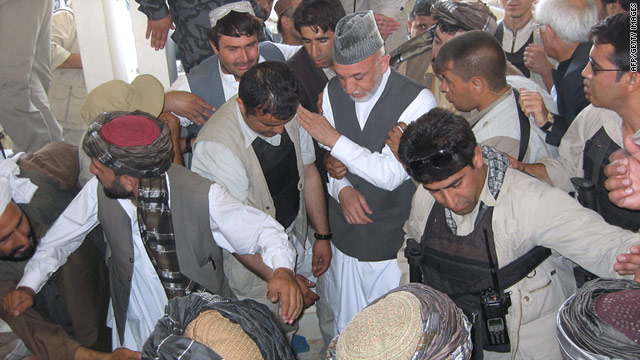 Kabul, Afghanistan (CNN) -- A senior Afghan intelligence official was killed Thursday when a bomb exploded in the country's northern Kunduz province, according to a provincial council chief.

Payenda Khan -- who headed up a district in Kunduz for the National Directorate of Security -- was killed, and three children were injured in the blast, said Mahbobullah Mahbob.

Khan was killed in the Afghan district of Bander Khanabad, and the Taliban have claimed responsibility for the attack.

His death is latest in a series of high-level officials who have recently been killed across the country.

The most high-profile strike occurred in July, when the Taliban also claimed responsibility for the death of the president's half-brother, Ahmed Wali Karzai.

The Kandahar provincial council chief was considered an influential power-broker and key presidential ally in the country's southern provinces.

Last week, militants stormed the compound of the governor of Afghanistan's Uruzgan province.

A least 19 people were killed and 37 wounded, including three police officers, in that attack.

The governor, Muhammad Omar Shirzad, managed to escape after being surrounded by security guards while a gun battle raged for several hours.

One soldier was killed when a man wearing an Afghan National Police uniform turned his weapon against the service member.

Meanwhile, coalition forces say they captured a senior Haqqani leader, responsible for more than 250 fighters, in the southeastern province of Paktiya.

The Haqqani network is an insurgent group loosely affiliated with the Taliban, and is believed to operate out of Pakistan's frontier territories.